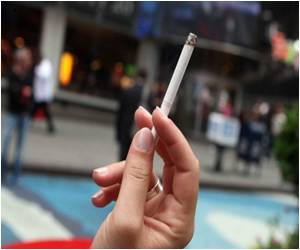 A specific form of vitamin E supplement may help give ex-smokers an extra boost towards living a healthier lifestyle.

In the small study, improvement in blood vessel function associated with the added vitamin E potentially translates into an estimated 19 percent greater drop in future risk for cardiovascular disease.

Smokers were recruited to participate in a study to quit smoking for seven days, with blood markers of inflammation and blood vessel function measured before and after the trial. After seven days of not smoking, participants saw an increase in their vascular function by an average of 2.8 percent. Those who quit smoking and also took the gamma-tocopherol form of vitamin E showed a 1.5 percent additional improvement in vascular function.


While these changes in vascular function may appear to be small, previous large-scale studies suggest that every 1 percent increase in vascular function - or improvement in the blood vessel's ability to dilate - translates into a 13 percent drop in risk of developing heart disease later in life.
Advertisement
"This is a very short-term study that shows very promising effects," said Richard Bruno, associate professor of human nutrition at The Ohio State University and senior author of the study.

"The underlying rationale is that we know it takes many years before the risk for cardiovascular disease of a former smoker matches that of a nonsmoker. We hope to develop a therapy to combine with smoking cessation that could accelerate the restoration of vascular function and reduce cardiovascular risk."

The supplement in the study is not the same as the average vitamin E available on most store shelves. Vitamin E occurs in eight forms based on their chemical structure, and the most well-known form belongs to a variety called tocopherols.

In this study, researchers tested the effects of the gamma-tocopherol form. The most common form of vitamin E, and the one for which humans have a dietary requirement, is alpha-tocopherol.

Though taking gamma-tocopherol is safe, Bruno noted that longer-term studies with more participants would be required to nail down specific dietary recommendations related to smoking cessation.

A total of 30 smokers in their 20s who had smoked at least half a pack per day for a year participated in the study. All participants stopped smoking, and 16 received 500 milligrams daily of gamma-tocopherol while 14 received a placebo.

In addition to taking blood samples, researchers measured vascular function by obtaining ultrasound images of an artery in the upper arm as the vessel responded to a surge of blood flow after circulation in the arm was stopped for five minutes.

The quality of vascular function is defined by the artery's ability to dilate in response to the surge of blood - more dilation suggests the vessel has appropriate responses to changes in blood flow.

Participants who took the supplements showed greater improvements in vascular function and also had lower levels of two inflammation-related proteins in their blood than did participants who received a placebo.

Bruno said the lower levels of those two proteins in the supplemented participants' blood suggest that the gamma-tocopherol form of vitamin E restores vascular function at least in part by lowering inflammation.

The study was recently presented at the annual Experimental Biology meeting in Boston. (ANI)