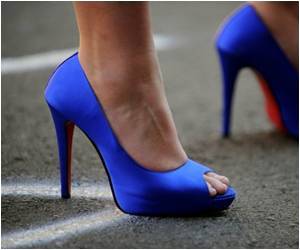 Two Spanish scientists have now designed a new equation that can help provide an estimate of an individual's speed.

The result has applications in the study of fossil trackways of human footprints.

Javier Ruiz, from the Complutense University of Madrid (Spain), and his colleague Angelica Torices, from the University of Alberta (Canada), just out of curiosity, wanted to check how accurately an individual's speed could be calculated based on their tracks.


In the spring of 2008, they collected data as 14 palaeontology students from the Complutense University of Madrid ran along a beach in Asturias (Spain).
Advertisement
The results showed that, without needing any other data such as leg length, they were able to achieve quite a high degree of accuracy, with a margin of error of 10 to 15 percent.

The researchers applied their formula to estimate the speed at which the humans were travelling who left the Pleistocene era fossil trackways found in the Willandra Lakes Region of Australia.

"A previous study had made a very elaborate calculation of their speed but the results were as high as if they had been professional athletes" Ruiz explained. His results show a reasonable sprint pace.

In order to come up with their equation, Ruiz and Torices compared the data obtained in the experiments with the students with data from professional athletes who compete in 100 and 400-metre races.

Up to now, the individual's leg length or at least an estimate of the length was required to calculate speed based on tracks. An equation formulated by the British zoologist Robert McNeil Alexander in 1976 was used which he based solely on data obtained from his children running.

Ruiz and Torices measured the speed and stride length of the students as they ran along the beach and applied Alexander's equation.

"The data fit with the equation very well", Ruiz explained, "Alexander did a good job with very little statistical data but with a large mathematical basis and we have seen empirically that his equation is correct."

In the case of the athletes, the researchers had data on speed and stride length but not limb length, which led Ruiz to modify the equation so that this piece of data was not needed.

"There was a very good degree of accuracy with the new equation with a 15 percent margin of error, even better than the equation that was generally used whose margin of error was 50 percent," he asserted.

In addition, the calculation works perfectly well both whether the individuals are running or walking and this was very surprising according to Ruiz.

Despite that fact that the speed calculation is very accurate, Ruiz admitted that it couldn't be applied in an absolute and unequivocal manner but rather statistically.

"Strangely, sometimes 400 and 100-metre athletes have the same stride length but run at different speeds. What the body does is try to optimise how energy is used at a given speed," he noted.

The results were published in 2013 in the journal 'Ichnos.'

Study Says Risks of Delaying ACL Reconstruction in Young Athletes may be too High
The benefits and risks of repairing a torn anterior cruciate ligament (ACL) in young athletes under ...