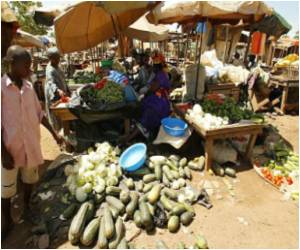 Musicians from Vienna transformed the fresh goods in a Madrid market into honking, whistling instruments with a pumpkin for a drum, carrots for flutes and turnips for trumpets.

Visiting members of the Vienna Vegetable Orchestra marked the centenary of the San Miguel market in the centre of the Spanish capital by taking saws and drills to its vegetables, coring and boring holes in them to make wind instruments.

"The vegetables have to be fresh, and we basically work with all kinds of vegetables," said Ulrich Troyer, one of the group's 10 or so members.


"We invent every time some new possibilities to build instruments out of vegetables," added Troyer, a bespectacled young man with a ginger beard.
Advertisement
"The instruments can break during the show or get dry during the day so you have to have some back-up instruments."

A hollowed-out celery root serves as a percussion instrument and a long white turnip with a green pepper on the end plays like a horn.

Most serviceable of all the root crops is the humble carrot -- whether hollowed and blown, tapped with a drumstick, or slotted in as a mouthpiece in a turnip flute.

Although a carrot may produce a tuneful whistle, few of the vegetable instruments really resemble anything found in a concert hall.

Since its founding in 1998, the group has played jazz, modern classical music and electronica to audiences in Paris, Hong Kong, London and beyond.

Although the group hails from one of the homes of European classical music, their vegetable sound is far from Mozart.

In the market in Madrid the results -- showcased at the end of the day in a concert by the solemn-faced musicians, all in black -- sounded like an avant-garde blend of electronica and tribal rhythms.

"The challenge is to come to a place and to work with what we find there. Of course the eggplants in Asia are very different from Spanish eggplants," said Ulrich.

"We have to check what is available in the region, in the season of the year but usually there is not any problem to find material."

After the concert, the vegetables were prepared for the Madrid audience to eat.

"Some groups do encores at the end," said Sandra Walkenhofer, the band's manager. "We do vegetables and soup."

More News on:
Why Do We Eat - Nutrition Facts Diet Lifestyle and Heart Disease The Acid-Alkaline balance, Diet and Health Acid Base Dietary Balance and its Influence on Our Health and Wellbeing Health benefits of bananas Raga Therapy for Healing Mind and Body Snake Gourd Glory Radish - A Bountiful of Nutrition Brand-Food Rules for the New Year Moringa

Eat More Vegetables and Less Meat
Go vegetarian and consume lesser meat to save your self and the environment, is the advice of a ......

Cancer Fighting Substance in Fruits and Vegetables
Gossypin, a naturally occurring substance present in fruits and vegetables is now thought to be an ....

Bacteria Present on Fresh Fruits and Vegetables Depend on Type of Produce, Cultivation Practice
Researchers suggest that the type of surface bacteria present on fresh fruit and vegetables depend ....

Radish - A Bountiful of Nutrition
Radish is a winner all the way. It is one of the cheapest and the healthiest foods nature offers us ...