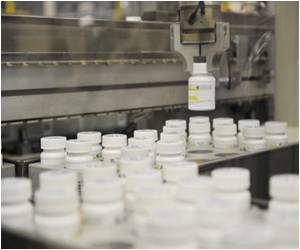 A Can$3 million (US$3 million) drug stash was found by Montreal police that included their first ever black market discovery of a synthetic drug that is "40 times stronger than heroin."

Authorities seized more than 300,000 tablets of the illegally-produced synthetic prescription drug desmethyl fentanyl, as well as marijuana, hashish and ecstasy from a makeshift Montreal laboratory on April 25, said a statement.

So powerful is the drug that one of the policemen involved in the bust was hospitalized with heart palpitations after briefly coming in contact with it, even though he was wearing a protective mask.


Some of stash was headed for the United States.

GSKs Drug for COPD Gets FDA Nod
GlaxoSmithKline announced that its drug, Breo Ellipta, has been approved by the USFDA for use in ......

New Class of Drugs for Skin Cancer Successfully Tested in Humans
A new class of drugs that can target a rouge protein responsible for proliferation of skin cancer .....

After Cancer, Diabetes Drug may Not Improve Survival Rates
Despite previous scientific studies that suggest diabetes drug metformin has anti-cancer ......