Use of Cancer-Causing Arsenic in Rice to be Limited 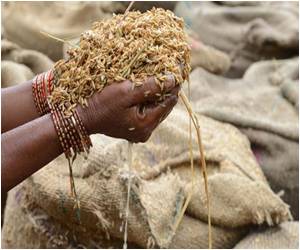 In order to protect the consumers of rice, the governments have now agreed upon the first international standards that limit the use of cancer-causing arsenic in rice.

The Codex Alimentarius Commission, the top global decision-making body for food standards, issued the decision at its ongoing annual meeting in Geneva.

Tourists Give Cup Thumbs Up to a Pricey World Cup

World Cup tourists have given a big thumbs up to the just-ended event in Brazil despite high prices, according to a study released Tuesday.
Advertisement

"Arsenic is an environmental contaminant. It occurs naturally and is taken up by plants from the water and soil when they're growing, in particular rice," said World Health Organization food safety coordinator Angelika Tritscher.


The commission set a maximum of 0.02 milligrammes of arsenic per kilo of polished race -- the product that is traded and consumed.

"The main driver for Codex standards is trade. But when we talk about safety standards, the main purpose is clearly to protect the health of consumers," said Tritscher.

German sausage makers have been fined a sizzling 338 million euros ($460 million) for fixing their prices to the retail sector for many years, says the national competition watchdog.
Advertisement
Arsenic occurs in the Earth's crust. Some of the heaviest concentrations are in Asia, where rice is a mainstay.

Heavy rice consumption has been found to compound the impact of arsenic in drinking water.

"Since rice is a very important stable food for many countries and many regions of the world, a significant part of the global population is affected," Tritscher said.

Bangladesh has been a top concern, with tens of millions of rural dwellers exposed via wells drilled in the 1970s in "access-to-water" programmes.

Parts of Cambodia, China, India and Vietnam have also been affected.

Long-term exposure can cause cancer and skin lesions, Tritscher said. It is also linked to heart disease, diabetes and damage to the nervous system and brain.

Arsenic rarely grabs headlines in the same way as other food crises.

The 186-nation Codex commission is run by the WHO and fellow UN agency the Food and Agriculture Organization (FAO).

Its standards must be set down into national laws to take effect.

"We all expect our food to be safe and of good quality. We don't expect to get sick from our food," said senior FAO food standards officer Tom Heilandt.

The rice decision followed years of research which fed into a policy-making process helmed by China and Japan.

"One of the core principles of Codex standards is that they are science-based," Tritscher said.

"The outcome of the assessments was that you cannot define a safe exposure level. The consequence is that you have to try to reduce exposure as much as possible," she added.

"We operate on the 'alara' principle -- as low as reasonably achievable -- which balances how low you can go without having to discard the majority of the food supply."

The commission also set out ways to reduce arsenic levels.

They include growing crops in raised beds instead of flooded fields, drying out paddies before harvest, and regular checks on water supplies.

Source: AFP
Advertisement
<< Random Nature of Metastasis Revealed in New Study
New Study may Map the Path of Discovery of an Anticancer Ag... >>

Arsenic Poisoning
News Archive
News Resource
Advertisement
News Category
Milestone In Voluntary Blood Donation Achieved Samsung Reinvents Toilet for the Poor Which is a Better Form of Exercise: Daily or Weekly? First Phase of Foot-and-Mouth Disease Vaccination Shocking News: Polio Cases Return After a Decade in the US
More News
Sign up for Wellness Consult a Doctor Sign up for Selfcare