US Warns of 'Forest Fire' Like Spread of Ebola 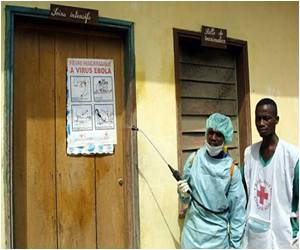 US authorities warned Monday that the deadly Ebola virus can spread like forest fire, urging travelers to West Africa to take extra precautions amid the largest outbreak in history.

Since March, there have been 1,201 cases of Ebola and 672 deaths in Guinea, Liberia and Sierra Leone, the Centers for Disease Control and Prevention said.

Two Americans -- one doctor and one healthcare worker -- in Monrovia, Liberia have come down with the virus, characterized by fever, joint pain, diarrhea, vomiting and often fatal bleeding.


"The likelihood of this outbreak spreading beyond West Africa is very low," admitted Stephan Monroe, deputy director of the CDC's National Center for Emerging and Zoonotic Infectious Diseases.
Advertisement
But, he added, it is a "rapidly changing situation" and the CDC must be "prepared for the very remote possibility" that a sick traveler could bring the disease into the United States.

The CDC issued a level two notice -- one notch below a call to avoid nonessential travel to the region -- warning people to avoid contact with blood and bodily fluids of sick people in the affected countries.

The CDC also sent out a notice to health care professionals in the United States, reminding them to find out if patients have traveled to West Africa in the last two weeks, to familiarize themselves with the symptoms of Ebola and to isolate any suspected cases.

Most of the exposures to Ebola in health care settings have been through needle sticks and exposure while disposing of the diarrhea, vomit and blood of sick people, said Monroe.

- Symptoms may be mistaken -

People are not contagious unless they exhibit symptoms, but often these signs -- like fever and body aches -- can be mistaken for other diseases like malaria and Lassa fever, experts said.

Also, only about half of cases involve bleeding, despite the perception that Ebola is characterized by widespread hemorrhage.

The State Department said the United States was providing "personal protective equipment and other essential supplies" to the affected areas.

"We're taking every precaution, of course, as would be expected," said spokeswoman Jen Psaki, adding that the situation was not expected to affect a planned summit of African leaders next week in Washington.

The CDC said the family members of the American doctor who has contracted Ebola, Kent Brantly, had been living with him in Liberia.

However, by the time he fell ill they had already returned to the United States. As a precaution, they are being monitored for signs of fever for the incubation period of 21 days.

An outbreak could not be declared over until two full incubation periods -- 42 days -- have passed without new cases, he added.

"The concern is that the outbreak can be reseeded, much like a forest fire with sparks from one tree," said Monroe.

"That is clearly what happened in Liberia," he said, noting that the country made it for more than 21 days without cases, but Ebola returned.

"They were reseeded by cases coming across the border, so until we can identify and interrupt every source of transmission, we won't be able to control the outbreak."

The fatality rate from Ebola can reach as high as 90 percent, though this time it has stayed around 60 percent, suggesting that protective measures are having an effect, the CDC said.

However, there is no end in sight to the outbreak, and cases are expected to mount in the coming months.

"The response to this outbreak will be more of a marathon than a sprint," said Monroe.

Ebola Outbreak Monitored by US, Aiding Bid to Stop Spread
The outbreak of deadly Ebola virus, which has now reached Nigeria, is being closely monitored by US ...

Liberian Man With Ebola-like Symptoms Dead
Even without confirming that the virus was the cause of his death, a Liberian man, who was ......