Ebola Outbreak Monitored by US, Aiding Bid to Stop Spread 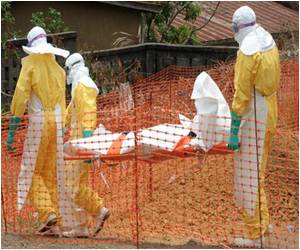 The outbreak of deadly Ebola virus, which has now reached Nigeria, is being closely monitored by US officials who are working with governments and aid groups to try to stop the spread.

"Our thoughts and prayers are with those fighting the virus," Will Stevens, spokesman for the State Department's Africa bureau, told AFP.

"The US government continues to provide a comprehensive, multi-agency response to assist those countries affected by the Ebola virus outbreak," he added, saying multiple US agencies were "contributing to the outbreak response efforts."


As of July 20, the number of Ebola cases recorded in the months-long epidemic stood at 1,093, including more than 660 deaths, according to the World Health Organisation (WHO).

Ebola-like symptoms was seen in a Liberian man, who was hospitalized in Lagos, but the presence of Ebola virus is not yet confirmed, Nigerian officials said Thursday.
Advertisement
Liberia has seen 127 fatalities, and there have also been hundreds of cases recorded in Guinea and Sierra Leone.

But there were growing international concerns after a Liberian national died Friday in quarantine in Lagos, confirmation that the virus has reached Africa's most populous country.

US agencies including from the Center for Disease Control, and Pentagon bodies like the Defense Threat Reduction Agency and Army Medical Research Institute of Infectious Diseases (USAMRIID) have been lending their expertise to local health officials and international specialists.

Zaire Ebola, the deadliest of three Ebola strains and the species behind the current outbreak, can fell its victims within days, causing severe fever and muscle pain, weakness, vomiting and diarrhoea -- in some cases shutting down organs and causing unstoppable bleeding.

Dengue and Chikungunya: The Dirge of a Nation

Dengue, also known as 'break bone fever' is caused by the dengue virus. It sets in eight days after the mosquito bite. Mortality rate can be reduced to 15%, if timely treatment is provided.
Advertisement
<< 'Solar Flare' in 2012 Could Have Pushed Earth into Dark Age
Marijuana Legalization Called for by New York Times >>

Senegal Plans to Stop Ebola With a 'Well-Oiled System'

As the suspected death toll of Ebola cases in Guinea and Liberia rises to 111, Senegal vowed on Tuesday that it is prepared for any spread of the deadly virus.
Advertisement
News A-Z
A B C D E F G H I J K L M N O P Q R S T U V W X Y Z
What's New on Medindia