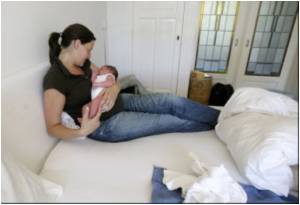 The preterm birth rate in the U.S. hits the lowest mark for the fifth consective year in 2011 to 11.7 percent, reveal sources.

Preterm Infants Learn to Speak Fast If Parents Converse With Them

The rate of the vocabulary growth and IQ score are more strongly related to the number of words the parent says per hour to the child than to parent's education and socioeconomic status.
Advertisement

"These results demonstrate that many premature births can be prevented with the right policies and bold leadership," said March of Dimes President Dr. Jennifer L. Howse. "Our national progress in reducing premature births over the past five years shows that when infant health becomes a priority, babies benefit. We must implement proven interventions and accelerate our investment in new research to prevent preterm birth so one day every baby will get a healthy start in life."


The US preterm birth rate peaked in 2006 at 12.8, after rising steadily for more than two decades, according to the National Center for Health Statistics. It dropped to 11.7 in 2011, the lowest in a decade.

If you are trying to find out whether you have conceived this time around, you can ask other people, worry in silence or take this quiz on early signs and symptoms of pregnancy.
Advertisement
All this improvement means not just healthier babies, but also a potential savings of roughly $3 billion in health care and economic costs to society, said Dr. Howse. About 64,000 fewer babies were born preterm in 2010, when compared to 2006, the peak year.

Dr. Howse attributed the improved rates to an expansion of successful programs and interventions, including actions by state health officials in 48 states, the District of Columbia and Puerto Rico, who formally set goals to lower their preterm birth rates 8 percent by 2014 from their 2009 rate, based on a challenge issued in 2011 by the Association of State and Territorial Health Organizations.

On the 2012 Report Card, 45 states, the District of Columbia, and Puerto Rico saw improvement in their preterm birth rates between 2009 and 2011, earning 16 of them better grades.

The largest declines in premature birth occurred among babies born at 34 to 36 weeks of pregnancy, but the improvement was across the board. Every racial and ethnic group benefitted, and there were fewer preterm babies born at all stages of pregnancy.

The March of Dimes "Healthy Babies are Worth the Wait" campaign urges health care providers and patients not to schedule a delivery until at least 39 completed weeks of pregnancy, unless there is a medical reason to do so. Many important organs, including the baby's brain and lungs, are not completely developed until then. The U.S. Department of Health and Human Services "Strong Start" initiative is partnering with the March of Dimes to raise awareness about the importance of a full term pregnancy through paid advertising support and collaboration with hospitals to improve perinatal care.

The Report Card also gauges states' progress toward lowering their preterm birth rates by tracking contributing factors.Worldwide, 15 million babies are born too soon each year and more than one million of those infants die as a result of their early births. The US ranked 131 out of 184 countries, according to a May 2012 global report on premature birth issued by the March of Dimes and several partners. This November 17th, the March of Dimes and its global partners will mark the second World Prematurity Day by asking everyone to post a story about a baby born too soon at World Prematurity Day. The page will feature an interactive world map showing the home place for each story told.

Also on Nov. 17, the Empire State Building in New York City will be shining in purple light to symbolize hope for a healthy start for more babies.

Top 10 Alarming Risks of Low Birthweight in Babies
News Archive
News Resource
Advertisement
News Category
Which is a Better Form of Exercise: Daily or Weekly? First Phase of Foot-and-Mouth Disease Vaccination Shocking News: Polio Cases Return After a Decade in the US Death Caused by a Rare Type Amoeba: Research Study Japan Approves Smallpox Vaccine for Monkeypox
More News
Sign up for Wellness Consult a Doctor Sign up for Selfcare