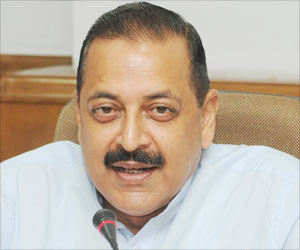 The award was conferred on Dr Jitendra Singh at a ceremony held in the national capital during the 11th National Conference of DIPSI.

Advertisement
‘Dr Jitendra Singh is a consultant, clinical practitioner, author and a newspaper columnist. His pioneering work on Stress Diabetes in Kashmiri Migrants was hailed by the World Health Organization. ’


Dr Jitendra Singh acknowledged the support and patronage from his teachers and mentors like Dr V. Seshiah.

He said that it was his destined privilege to have been groomed under some of the leading doyens and founding fathers of Diabetology in India, including Late Prof. Sam G.P. Moses and Late Prof. M.M.S. Ahuja.

He also added that the national and international wide exposure that he has received over the decades as a diabetes researcher has helped him prepare himself to discharge his responsibilities as a functionary in the Government of India.

Diabetes Tests Will Now be Free-Of-Cost at State Hospitals in Uttar Pradesh
The principal secretary (health) Arvind Kumar has issued orders to make free, both fasting and post ...

24,000 Diabetes Deaths in UK can be Avoided
UK could see up to 24,000 less diabetes-related deaths each year, if patients and doctors managed .....

Diabetes Breakthrough: Insulin-Producing Mini Stomachs Could Lead To New Treatments
Cells taken from the lower section of the stomach have the greatest potential to be reprogrammed ......