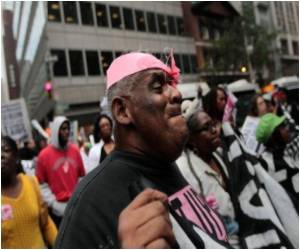 Death could be a leveler. But some are always more equal, even in death, at least in the US. Uninsured minority pedestrians hit by cars are at a significantly higher risk of death than their insured white counterparts, even if the injuries sustained are similar.

Racial Disparities Still Rampant in Drug Arrests in the US

Over two decades after President Ronald Reagan escalated the war on drugs, arrests for drug sales or drug possession are still rising in the United States.
Advertisement
The greater mortality rates from pedestrian trauma in minorities and the uninsured are not accounted for by greater rates of injury, Haider says.

"Do we treat minorities and the uninsured differently? I don't think so, but we've got to ask the question," says Haider, who is also co-director of the Johns Hopkins Center for Surgical Trials and Outcomes Research. "We don't actually know what is leading to these disparities."

Previous studies have shown that insurance status and race may increase mortality risk because of treatment delay or differences in services provided. A greater prevalence of, or lack of treatment for, comorbidities, such as obesity, diabetes or hypertension, could be factors that raise the risk of death among injured minority or uninsured crash victims.

Since the underlying causes of the disparities can't be easily answered, Haider says, policy makers need to focus in the short term on better pedestrian injury-prevention programs, particularly in the inner city, where many of these deadly crashes occur. He points to successes in getting people to use seat belts and in getting parents to put their children in safety seats  two innovations that have saved many lives. He concedes, however, that the problem of pedestrian injury may be more complicated

The findings have been published in the August issue of the journal Surgery.

Find a Hospital Blood - Sugar Chart Indian Medical Journals Drug Side Effects Calculator Noscaphene (Noscapine) How to Reduce School Bag Weight - Simple Tips Daily Calorie Requirements A-Z Drug Brands in India Find a Doctor Iron Intake Calculator
This site uses cookies to deliver our services. By using our site, you acknowledge that you have read and understand our Cookie Policy, Privacy Policy, and our Terms of Use