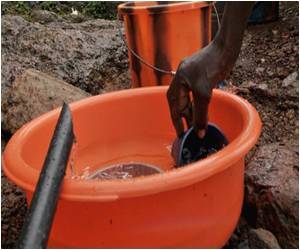 World has won hands down by beating the 2015 deadline to halve the ratio of people drinking unsafe water, the United Nations Children's Fund and the World Health Organisation said on Tuesday.

The two UN agencies released a report saying that between 1990 and 2010, two billion people had gained access to improved water, through tools such as water pipes and protected wells.

The report, however, found that governments, communities and other entities will likely fall short of a target for three-quarters of the planet to have access to improved sanitation access.


The water milestone is one of the first Millennium Development Goals to be met. The goals, outlined by the UN, comprise eight targets to help the world's poor, including by improving living conditions and stopping the spread of HIV and AIDS.

Water crisis is beginning to haunt many parts of the world, rainwater harvesting could offer a way out. Water is precious and we must save every valuable drop.
Advertisement
"For children, this is especially good news," UNICEF Executive Director Anthony Lake said in a statement. "Every day more than 3,000 children die from diarrhoeal diseases. Achieving this goal will go a long way to saving children's lives."

According to the report, 89 percent of the world population had access to improved drinking water at the end of 2010, about 6.1 billion people. The report estimates the proportion will improve further, to 92 percent in 2015.

In Malawi, for instance, 7.2 million people gained access to clean water between 1995 and 2010, almost half the population.

But despite the encouraging trend, Lake noted that 11 percent of the planet -- about 783 million people -- remained without safe water supplies, and billions have no toilets.

The Millennium Development Goal is for 75 percent of the world's population to have access to improved sanitation by 2015. But that figure is likely to fall well short, at just 67 percent, the report said.

Currently about 2.5 billion people have no access to decent sanitation.

In the world's poorest countries, 14 percent of the population still drinks water from rivers, ponds and lakes.

Water Matters: Why You Need to Drink Enough Water Everyday
News Archive
News Resource
News Category
Milestone In Voluntary Blood Donation Achieved Samsung Reinvents Toilet for the Poor Which is a Better Form of Exercise: Daily or Weekly? First Phase of Foot-and-Mouth Disease Vaccination Shocking News: Polio Cases Return After a Decade in the US
More News
Sign up for Wellness Consult a Doctor Sign up for Selfcare