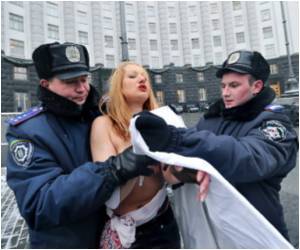 The doors of an old car fly open, and four young women with bare breasts step out with protest signs, preparing to chant slogans.

It's the latest protest by Ukraine's Femen movement, who have become famous for using unusual and bare-fleshed tactics to protest against discrimination, sex tourism, prostitution, and the lack of women in government.

A well-known French philosopher and leading feminist has pointed out that mothers, including those in Australia, should be women first and mothers second.
Advertisement

With flower wreaths decorating their hair in the Ukrainian folk tradition, they gathered near the railway station in Kiev and shouted "Impeach (President Viktor) Yanukovych!" before the cameras.


"It's through them that the West knows Ukraine," said leading Ukrainian novelist Oksana Zabuzhko, whose latest work was reviewed in a German magazine next to a photograph from a Femen protest.

A Spanish feminist coalition launched a campaign Friday to support the Socialist government's plans to liberalise abortion laws and counter a rival drive by abortion opponents.
Advertisement
This time, the protestors' ire was directed at Yanukovych, for his "sexist" invitation to foreign investors at the World Economic Forum in Davos to come to Ukraine in the spring when "women begin to undress themselves."

Femen exhibit not only their breasts but also their behinds, pretending to defecate to show that the President "has crapped".

The movement boasts some 300 young activists in Kiev alone, and has no trouble finding issues to protest via public striptease, be it the absence of female representation in the government, lack of press freedom, or even municipal water supply cuts.

Among their more daring coups was a protest against "the rape of Ukraine" at the polling station where Yanukovych cast his vote during the presidential election last February.

Despite the fame brought by their nudity, their first bare-chested appearance in 2009 was accidental. The women were protesting prostitution with signs on their bare backs when a photographer made a frontal shot.

After seeing it in the press, they decided to carry on topless.

"We understood that the only way to attract the maximum attention to a problem is to protest with bare breasts," said the group's leader Anna Gutsol. "It's still a peaceful protest, but the most effective."

"We have minimum money to develop our organisation, but we have our bodies, our brains, and our creativity. First one looks at our breasts, then our banners," she said.

At times the banners are equally shocking: last October the Femen group said they "won't sleep with Kremlin dwarfs", apparently referring to Russian Prime Minister Vladimir Putin, who was in Kiev on an official visit.

The protestors say their goal is to change the role of women in a patriarchical society. "In Ukraine, women don't have the same rights as men, many marry at 20 and have neither career nor financial independence," said Gutsol.

"We would like to create a culture of defending women's rights," said another activist, Sasha Shevchenko.

Not everyone agrees, however.

"They abuse the tactic of undressing and have largely compromised it," said Zabuzhko. "Resorting to striptease every time will eventually lead to losing sight of the political message but boil down to a show by naked girls."

Other observers have spied a commercial motivation in the movement.

"The point of their activities is to sell their breasts for a large sum of money to any sort of political organisation," said Andriy Taranov, co-founder of Kwendi communication group in Kiev.

"It's a well-constructed project, and there is more brain matter behind their breasts than it may seem when looking at them," he said.

Femen vehemently deny being a sell-out. "Selling one's idea is like selling one's child," said Gutsol, who is considering together with her comrades to turn the movement into a political party.

The group claims to function on about 700 euros per month (1,000 dollars) that come from sponsors and proceeds from sales of 'breast-o-graphs': prints made by dipping breasts into paint and then on canvas.

"Whatever your protest may be, you have very little chance to change things while remaining in front of parliament," said Shevchenko. "Right now, the main goal of Femen is to really take power and resolve problems."

A rights group in Tunisia announced Saturday the opening of a feminist university to promote women's causes in the north African country where at least one in five women have been beaten.
Advertisement
<< Michael Jackson's Father to Invest in Vietnam Disneyland Co...
Even as Recovery Boosts Turkey's Economy, Unemployment Stil... >>

Feminists in the United States have warned they will be on high alert on Sunday to ensure that none of the ads aired on television during the big Super Bowl football event insult women.
Advertisement
News A-Z
A B C D E F G H I J K L M N O P Q R S T U V W X Y Z
What's New on Medindia