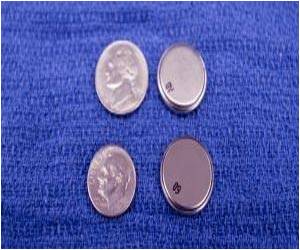 Button batteries from fidget spinners were swallowed by two young children, which caused burns in their esophagus. The objects were removed by an emergency endoscopy.

This report highlights the risk of severe injuries involving these popular toys and the reports were published in the Journal of Pediatric Gastroenterology and Nutrition (JPGN).

Advertisement
‘Swallowed button batteries in a toy or product can pose a potential danger to children.’


The reports add to previous safety hazards from fidget spinners, especially in the hands of toddlers and preschoolers.

In an accompanying editorial, Drs. Athos Bousvaros and Paul Rufo of Boston Children's Hospital write, "Having an unlabeled button battery in a toy or product that children can handle and break poses a potential danger to children."
Advertisement
Swallowed Batteries from Fad Toy Lead to Internal Burns

Fidget spinners are a simple but popular toy, consisting of a plastic piece that easily spins around a central bearing. Fidget spinners are sometimes marketed as anxiety-reducing devices for people with attention deficit-hyperactivity disorder, although those claims have not been researched.

Amid last year's fidget spinner fad, reports of young children swallowing fidget spinner parts have appeared. Some but not all fidget spinners have batteries, enabling lights to shine when the toy is spinning.

One child swallowed the central disk cap of a broken fidget spinner, including a small button battery, while the other swallowed a battery released from a damaged disk. When batteries come into contact with body fluids, they can cause severe burns in a short time. In the hospital, both children were found to have deep burns of the esophagus.

One child required emergency endoscopy to remove an impacted piece of the broken toy, including a one-inch button battery. He remained in the hospital for nearly three weeks due to concern about a possible fistula (connection) between the esophagus and aorta--a life-threatening complication that may develop days to weeks after the battery is removed. (The National Capital Poison Center has more information on the devastating injuries caused by swallowed batteries.)

Two other JPGN reports describe injuries in children who swallowed broken fidget spinner parts, but not batteries. In both cases, the objects were removed from the esophagus by emergency endoscopy, following NASPGHAN guidelines for swallowed objects (PDF link). Swallowed fidget spinner discs "should be presumed to contain a button battery until proven otherwise," Drs. Gurevich and Khalaf and colleagues note.

Button batteries are present in a wide range of household devices, including cameras, watches, and remote controls. While batteries in children's toys are usually well-secured, this may not be the case in devices not specifically designed for children.

Drs. Bousvaros and Rufo encourage pediatricians to report swallowed button batteries to the Consumer Product Safety Commission, which has already recognized this along with other potential hazards of fidget spinners.

The editorial authors note that NASPGHAN's advocacy efforts were instrumental in prompting regulatory action in response to swallowing hazards posed by high-powered magnets a few years ago.

Study Finds That Fidgeting During Interviews Helps Men Relax
A study has found that fidgeting helps men relax during job interviews, as it leads them to find it ...

Study Says Fidgety Children are on the Rise
It is now well-documented in literature that hyperkinetic disorders among children and adolescents ....