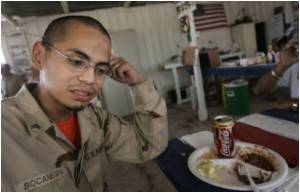 U.S. Marines investigate the association between traumatic brain injury (TBI) and the risk of post-traumatic stress disorder (PTSD) over time.

A team of scientists led by researchers from the Veterans Affairs San Diego Healthcare System and University of California, San Diego School of Medicine report that TBIs suffered during active-duty deployment to Iraq and Afghanistan were the greatest predictor for subsequent PTSD, but found pre-deployment PTSD symptoms and high combat intensity were also significant factors.

The findings are published in the December 11 online issue of JAMA Psychiatry.


The team, headed by principal investigator Dewleen G. Baker, MD, research director at the VA Center of Excellence for Stress and Mental Health, professor in the Department of Psychiatry at UC San Diego and a practicing psychiatrist in the VA San Diego Healthcare System, analyzed 1,648 active-duty Marines and Navy servicemen from four infantry battalions of the First Marine Division based at Camp Pendleton in north San Diego County. The servicemen were evaluated approximately one month before a scheduled 7-month deployment to Iraq or Afghanistan, one week after deployment had concluded, and again three and six months later.
Advertisement
PTSD is a psychiatric condition in which stress reactions become abnormal, chronic and may worsen over time. The condition is linked to depression, suicidal tendencies, substance abuse, memory and cognition dysfunction and other health problems.

The servicemen were assessed at each evaluation using the Clinician-Administered PTSD Scale or CAPS, a structured interview widely employed to diagnose PTSD and severity. Researchers asked about any head injuries sustained prior to joining the service and any head injuries sustained during deployment from a blast or explosion, vehicle accident, fall or head wound from a bullet or fragment.

Traumatic brain injuries are common. At least 1.7 million Americans annually sustain a TBI, with an estimated 5 million Americans living with TBI-related disabilities. More than half (56.8 percent) of the servicemen reported a TBI prior to deployment; almost a fifth (19.8 percent) reported a TBI during deployment. The vast majority of deployment-related TBIs (87.2 percent) were deemed mild, with less than 24 hours of post-traumatic amnesia. Of the 117 Marines whose TBI resulted in lost consciousness, 111 said it was less than 30 minutes.

"By contrast, deployment-related mild TBI increases post-deployment symptom scores by 23 percent, and moderate to severe injuries increase scores by 71 percent. This percent increase is equivalent to a 14-point increase in combat intensity scores for mild TBI, and a 37-point increase for moderate or severe TBI."

Baker noted many factors, both environmental and individual, may contribute to development of PTSD. Two of the most important are pre-existing psychiatric symptoms and the nature of the "trauma event."

"However, TBI was the strongest predictor of PTSD, even when controlling for pre-existing symptoms and combat intensity," she said. "These findings may be used to identify individuals who may be at risk for developing PTSD and provide them with more immediate health care."

Source: Eurekalert
Advertisement
<< Laughter may Not be the Best Medicine for Some People
Variety of Genetic Risk Affects Bone Cancer in Dogs >>

Subjective Well-Being in PTSD Improved by Neurofeedback
Utilising neurofeedback training to alter the plasticity of brain networks linked to post-traumatic ...

Ghrelin Primes the Brain for PTSD
Ghrelin - the hunger hormone makes the brain more vulnerable to traumatic events, suggesting that .....