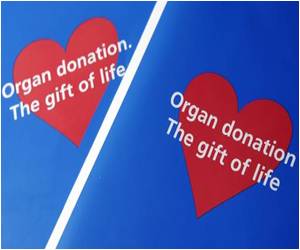 In the United States, researchers have discovered a way to develop bio-artificial replacement limbs suitable for transplantation, says a new study.

The rat forelimbs bioengineered with an experimental approach previously used to build bioartificial organs showed functioning vascular and muscle tissue, the study said. This also provided evidence that the same approach could be applied to the limbs of primates.

Discarded human kidneys are a suitable platform for engineering replacement kidneys. When cells are added, the structures behave as an effective bio-system.
Advertisement


Limbs contain muscles, bone, cartilage, blood vessels, tendons, ligaments and nerves - each of which have to be rebuilt and require a specific supporting structure called the matrix.

Transplantation of corneal tissues is the new eye surgery technique with positive result seen among old age people.
Advertisement
"We have shown that we can maintain the matrix of all of these tissues in their natural relationships to each other, that we can culture the entire construct over prolonged periods of time and can repopulate the vascular system and musculature," Ott said.

The authors added that although prosthetic technology has greatly advanced, the devices still have many limitations in terms of both function and appearance.

Over the past two decades a number of patients have received donor hand transplants, and while such procedures can significantly improve quality of life, they also expose recipients to the risks of life-long immuno-suppressive therapy.

The current study uses technology in which living cells are stripped from a donor organ with a detergent solution and the remaining matrix is then repopulated with progenitor cells appropriate to the specific organ.

Functional testing of the isolated limbs showed that electrical stimulation of muscle fibers caused them to contract with a strength 80 percent of what would be seen in newborn animals.

The vascular systems of bioengineered forelimbs transplanted into recipient animals quickly filled with blood which continued to circulate, and electrical stimulation of muscles within transplanted grafts flexed the wrists and digital joints of the animals' paws.

The research team also successfully decellularized baboon forearms to confirm the feasibility of using this approach on the scale that would be required for human patients.

The findings appeared online in the journal Biomaterials.

Liver Transplantation from a Live Donor is Safe

Nearly 80-90% of the liver cells are severely damaged after the first signs of liver cells. A live or deceased donor transplant improves liver functions.
Advertisement
Advertisement