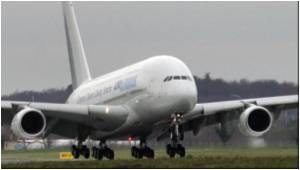 "Shall we take the eight o'clock air train to Paris?" It may sound strange to say now, but such jargon is likely to become commonplace someday -- if aviation futurists are right in their predictions.

This and other fantastic ideas are being conceived by experts at the International Civil Aviation Organization (ICAO) tasked with imagining the future of air travel.

At the Berlin Consumer Electronics Show, Futuristic Fridges are Displayed

The Ifa, Europe's top consumer electronics show, is normally all about gadgets that make life more entertaining with the latest flat screen televisions, stereo equipment and the like.
Advertisement

In the corridors of the UN agency's Montreal headquarters, they chat openly about air trains -- a term coined to describe jetliners flying in formation, like fighter jets, from departure to destination.


For air traffic controllers it would mean having to follow a single object or cluster of jetliners in the sky, reducing their workload.

Another proposal dubbed "tunneling" would require autopilots to guide aircraft through virtual tunnels in the sky, reducing the need for interaction between flight crew and air traffic controllers.

A Futuristic Plan to Collect and Recycle Summer Sunshine to Keep Roads Ice-free in Winter!

The UK will soon be witnessing a futuristic plan to collect and recycle summer sunshine to keep roads ice-free in winter.
Advertisement
Such visions of the future "are not going to become reality tomorrow, but probably in the not-too-distant future," Michel Wachenheim, France's representative at ICAO, told AFP.

In aviation, solutions to congestion problems envisioned for 10 or 20 years down the line must be considered now.

With airline traffic growing at rates of four to five percent annually, the number of airline passengers will soon double. So it is crucial to figure out how to eliminate bottlenecks at airports, in air traffic control and on international routes.

Both Europe and the United States have embarked on air traffic control infrastructure modernization programs called SESAR and NextGen, respectively. Their aim is to roll out new generations of air traffic management systems starting as early as next year.

ICAO is tasked with harmonizing the two systems and keeping in mind Asia, which is seeing double-digit growth in air traffic.

Its proposals are to be unveiled next year following a key air navigation symposium in Montreal this September.

Airports have already started adding more runways to meet the increasing demand for flights, and some air traffic zones have been split into smaller segments to ease the burden on air traffic controllers, allowing them to monitor a maximum of 15 jetliners simultaneously.

But these solutions have their limits: many crowded European airports cannot extend their runways because of a lack of available land, and creating too many tiny air traffic control zones that can be traversed in mere minutes would make them unmanageable.

The standard idea is to manage the trajectory of each aircraft in four dimensions -- including time -- throughout its flight for optimization.

In addition to boosting capacity, the industry would also realize economic and environmental benefits such as shorter travel time and less carbon emissions.

"For an airport, the worst is to have an airplane circling without being able to land," said Farid Zizi, who works with Wachenheim.

European lawmakers have already taken an important first step in one area.

Progress must still be made, however, in areas such as meteorological forecasting and shortening the minimum braking distances of airplanes to reduce their total time spent on runways.

American researchers have developed a magnetic sensor, which is smaller than a grain of rice yet sensitive enough to detect a fetal heartbeat.
Advertisement
<< Indian Comic Books Fight Back With Expo in Delhi
Best Way to Improve Your Mood is by Listening to Take That ... >>