Indian Comic Books Fight Back With Expo in Delhi 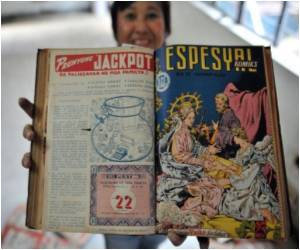 India's first comic book convention opens in the capital New Delhi on Saturday, with organisers expecting thousands of fans to prove the art form is thriving in the Internet age.

Comic Con India will introduce the country's booming youth market to new graphic characters including a warrior blessed by the sun god and a half-otter half-human superhero.

A new report has suggested that comic books may help in spreading awareness about testicular cancer and its symptoms amongst young men and their partners.
Advertisement

Jatin Varma, organiser of the two-day convention, told AFP that the effects of India's recent economic dynamism have spread from big business into the alternative worlds of youth culture and underground art.


"The number of artists working on comic books has grown, new graphic novels are being launched, bookstores are developing dedicated areas to display comics, it's all pretty exciting," he said.

A U.S. comic book collector has pleaded guilty to importing and possessing popular Japanese manga books that carry illustrations of child sex abuse and bestiality.
Advertisement
The Indian comic book is experiencing a renaissance after ten years in the doldrums.

Many middle-class Indians grew up on a diet of Amar Chitra Katha (Immortal Picture Stories) comics, which specialised in Hindu myths, historical narratives and ancient folktales.

But the arrival of cable television and video games in the 1990s saw a sharp drop in readership.

"Indian stories suddenly felt too old-fashioned -- kids were not excited by the idea that they were reading the same books their parents were raised on," said Varma.

Rina Puri, editor of Amar Chitra Katha series, put it more bluntly. "The Cartoon Network channel came to India and it pretty much halved our sales," she said.

With a steady drip of American cartoons and superhero movies, the young comic book reader ditched Hindu gods and goddesses for the adventures of Spiderman, Batman, X-Men and their ilk.

"Every child wants to have some special powers. When I was growing up, I used to wonder where the Indian superheroes were," Sanjay Gupta, president of regional Hindi-language publisher Raj Comics, told AFP.

Gupta's superheroes are defiantly Indian, drawing on popular cultural beliefs -- and they are selling well.

One series narrates the adventures of Nagraj (snake king), whose powers are based on ancient Hindu tales.

Ostensibly an employee in a TV station, he can produce snakes out of thin air and has the ability to spew venom and destroy his enemies with a single bite.

"His eyes hypnotise, his poison breath sears and his bite kills. Weapons do no harm him as his micro-snakes instantly heal the wounds," explains his official Internet profile.

In 2009 Nagraj fought the militants responsible for the 2008 Mumbai attacks, while recent stories have focused on Doga, a vigilante who wears a dog mask to conceal his identity while bringing corrupt politicians to justice.

The revival of comic books will be underlined at Comic Con, with graphic artists rubbing shoulders with children as well as publishers keen to spot the next big thing.

"We know this can't be compared to international conventions like the San Diego Comic-Con, but we see this as a sound investment," Comic Con India's Varma said, vowing the event would become an annual fixture.

"I expect a lot of comic book fans to turn up and hopefully the event will also inspire other people to enter the world of comic books once they see how much fun it can be."

One key element to the convention is the potential for movie cross-overs -- and Indian comic books and graphic novels are catching the eyes of film producers.

"The recent success of films based on comic series have led to a reverse trail of people seeking the book that the film was based on," Amruta Patil, one of the country's most promising graphic novelists, told AFP.

"People read 'V for Vendetta' and '300' after they had seen the hit films. One overhears the terms 'graphic novel' and 'comic' flying around far more frequently, and in more unexpected corners of the room."

"When I wrote "Corridor" and tried to get publishers interested, no one understood what on earth I was writing about. At times, I felt like a pickle seller, going from place to place, trying to sell my book," Banerjee said.

Today, things have changed, he said. "Everyone wants to make a graphic novel now: jump on the bandwagon."

Captain Haddock would have choked on his whisky: original artwork for a Tintin comic book fetched a record 764,200 euros (1.
Advertisement
<< You, Your Lover, One House: Easy Way to Make 500 Pounds in ...
The Future of Travel: 'Air Trains' >>

The Essence of Yoga Find a Doctor Drug Side Effects Calculator A-Z Drug Brands in India Sanatogen Loram (2 mg) (Lorazepam) Selfie Addiction Calculator Indian Medical Journals Sinopril (2mg) (Lacidipine) Find a Hospital
This site uses cookies to deliver our services. By using our site, you acknowledge that you have read and understand our Cookie Policy, Privacy Policy, and our Terms of Use