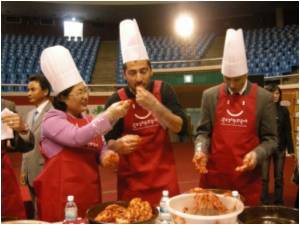 A Thailand trip normally means cold cocktails on the beach and spicy pad thai noodles, but for growing numbers of "detox" tourists, the menu calls for clay shakes and shots of wheatgrass.

At a "wellness centre" on Koh Phangan island in the Gulf of Thailand, travellers pay hundreds of dollars to abstain from food, coffee and alcohol and receive daily colonic flushes.

If you want a good massage, a bath under a 'medicinal' waterfall, followed by a good south Indian meal and rounded off by a good sleep at a comfortable resting place, visit Kuttralam in Tamil Nadu.
Advertisement

Many such centres are springing up across the "Land of Smiles," catering to tourists seeking to purge their bodies of toxins, shed kilos, relieve chronic constipation, kick nicotine addictions, and otherwise improve their health.


It is a tough regimen.

Detoxers survive on a rigid diet of shakes made with psyllium seed husks and bentonite, a type of clay -- which absorbs toxins later expelled during colonic cleanses -- herbal supplements, carrot juice, vegetable broth and water.

Thai tourist resort , Downtown Inn, is in the news lately for all the wrong reasons.
Advertisement
Then there is the daily do-it-yourself colonic cleanse, or enema, with a bucket of diluted coffee.

Caffeine and sugar withdrawals can be severe. Detoxers complain about crushing headaches that last for several days, nausea, mood-swings and dizziness.

But a few, like Peter from Britain, feel better than they have in years.

"I didn't have any nasty days and I definitely had a few days feeling 19 again," said the 41-year-old training consultant, who like other detoxers asked that their real names not be used out of embarrassment over the colon flushes.

He signed up for a three-day detox but liked it so much that he extended it to 10 days.

"I'm very glad I did it and I will probably do it every couple of years, at least," he said.

One side-effect of the fasting is vivid dreams about food. Alicia, a 37-year-old accountant from Britain, said she often dreamed about cake during her seven-day purge.

"Cake was a representation of all the things I loved and enjoyed," she said.

Another detoxer had dreams about working as a chef and eating large bowls of steamed asparagus.

For most, the colonic cleanse is the toughest part of the program.

Some people listen to their iPods during the 40-minute purge to help relax their muscles -- and muffle the sound.

"I discovered my favourite music for the process was (late jazz guitarist) Django Reinhardt," said Peter.

Photographs displayed in the wellness centre show examples of what detoxers should be expelling, and some participants happily share their experiences over dinner, when everyone gathers to slurp down bowls of vegetable broth.

"I give you three days and you will be talking about poo like it is a curry," said Ann, a 33-year-old nurse from Germany.

While the wellness centre promises detoxers will "feel much better" after the fasting and colonics, health professionals are sceptical about the benefits.

"There is not a single study to show they do any good at all," Australian nutritionist and health commentator Rosemary Stanton told AFP.

"What they do is they wipe out the helpful bacteria living in the bowel which are very important for the bowel and the body itself.

But some detoxers told AFP that fasting and flushing out their colons had cured their digestive problems.

"I have always been one of those constipated people. I usually only went three to four times a week -- I felt like a stuffed goose," said Ann, who has done two detoxes at Koh Phangan.

"Ever since the fast I'm going to the toilet every day. That is very life changing."

Other travellers said the detox inspired them to change bad eating habits and helped them lose weight.

"I was overeating because I wasn't addressing emotional issues in my life," said Alicia.

"I had been feeling unhealthy, sluggish, weight wasn't shifting from my body. Something was not right."

Fasting is not new -- it has been part of some religions for thousands of years as a way for followers to atone for sins, get closer to god and purify their minds.

While some detoxers in Thailand admitted feeling more open to exploring their spiritual side during the program, for most it was a time to reflect on relationships and career paths.

"To me it is a place where people go when they are at a juncture in their life and they don't really know which direction to take," said Ann.

"By doing the fast and slowing down, you look very closely at yourself."

Recession has not spared anyone as it has emerged that Key West's only lesbian-exclusive resort Pearl's Rainbow is going 'all welcome' for the first time over this Thanksgiving weekend
Advertisement
<< Continued Methadone Treatment Weakens Brain Function in the...
Quality Precedes Length of Life for Terminally Ill Patients >>

Essential Foods for a Healthy Detox

Sinopril (2mg) (Lacidipine) Calculate Ideal Weight for Infants The Essence of Yoga Turmeric Powder - Health Benefits, Uses & Side Effects Nutam (400mg) (Piracetam) Find a Doctor Hearing Loss Calculator Iron Intake Calculator Drug Interaction Checker Color Blindness Calculator
This site uses cookies to deliver our services.By using our site, you acknowledge that you have read and understand our Cookie Policy, Privacy Policy, and our Terms of Use  Ok, Got it. Close
×