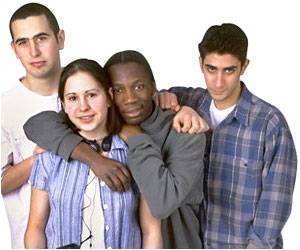 A survey found nearly one out of seven college students at a Texas university playing the Choking Game, a dangerous behavior where blood flow is deliberately cut off to the brain in order to achieve a high. The study was undertaken by The Crime Victims' Institute at Sam Houston State University.

The Choking Game, also known as the Fainting Game, Pass Out, or Space Monkey, is played individually or in groups and involves manually choking oneself or others, applying a ligature around the neck or a plastic bag over the head, placing heavy objects on the chest, or hyperventilating to attain a euphoric feeling. This practice has led to several suffocation deaths in Texas and across the country.

People who have lifestyle issues may be at risk for brain shrinkage and mental decline.
Advertisement

"This study was undertaken to determine who is playing the game, in what context, and how they learned about it," said Dr. Glen Kercher, director of the Crime Victims' Institute. "It is our hope that these findings will inform efforts by parents, schools, and community agencies to warn young people about the dangers of participating in the Choking Game."


The study was based on a survey completed by 837 students at a Texas university. Among the findings were:

The rising influence of media influences children watching TV serials and fashion shows with skinny models, to live on adult levels prematurely.
Advertisement
"Even though awareness of the Choking Game is growing, it should be noted that encouragement for parents to discuss this activity with their children should still be stressed," said Brittany Longino Smith, who co-authored the study "The Choking Game" with Dr. Kercher and Dr. Leana Bouffard, an Associate Professor at SHSU.

A similar study on the Choking Game found that 90 percent of parents would support incorporating information on the behavior in health and drug prevention classes.

While preventative programs have increased to help warn adolescents of the use of illegal substances, the Choking Game is another method of achieving similar effects that has been introduced to this age group. "This 'game,' as it is often called, does not require obtaining any drugs or alcohol, is free, and can go undetected by many parents, teachers, physicians, and other authority figures. Most importantly, many of those who engage in this activity, do not understand that the practice can be just as deadly as the illegal substances youth have been warned against," the study found.
Source: Eurekalert

California said Wednesday it will petition the US Supreme Court in a bid to enact a law that would ban the sale or rental of violent video games to people under 18.
Advertisement
Advertisement
This site uses cookies to deliver our services.By using our site, you acknowledge that you have read and understand our Cookie Policy, Privacy Policy, and our Terms of Use  Ok, Got it. Close
×