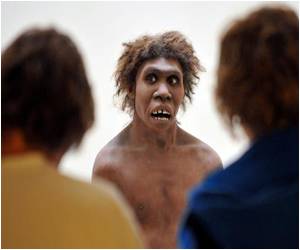 Tasks and responsibilities among Neanderthal groups were gender-based, revealed a new study that analysed the dental groove pattern and the possible ways males and females used their teeth.

Study performed by the Spanish National Research Council (CSIC), analyzed 99 incisors and canine teeth of 19 individuals from three different sites (El Sidron, in Asturias - Spain, L'Hortus in France, and Spy in Belgium), reveals that the dental grooves present in the female fossils follow the same pattern, which was different to that found in male individuals.

Analyses showed that all Neanderthal individuals, regardless of age, had dental grooves.


Antonio Rosas, CSIC researcher at the Spanish National Museum of Natural Sciences, said that this was due to the custom of these societies to use the mouth as a third hand, as in some current populations, for tasks such as preparing the furs or chopping meat, for instance.
Advertisement
The grooves detected in the teeth of adult women are longer than those found in adult men and therefore researchers assumed that the tasks performed were different, he further added.

It was still unclear which activities corresponded to women and which ones to men. However, the authors of the study noted that, as in modern hunter-gatherer societies, women might have been responsible for the preparation of furs and the elaboration of garments. Researchers stated that the retouching of the edges of stone tools seems to have been a male task.

Almudena Estalrrich, CSIC researcher at the Spanish National Museum of Natural Sciences, said that nevertheless, they believed that the specialization of labor by sex of the individuals was probably limited to a few tasks, as it was possible that both men and women participated equally in the hunting of big animals.

The study is published in the Journal of Human Evolution.

Neanderthals' Diet Included Vegetables too
Neanderthal diet was heavy on meat, but also included plant tissues such as tubers and nuts, ......

Foods That Stain your Teeth
Want to get whiter teeth? Food with high acid content and stains like cola, tea and sauces can make ...

Dentures
Dentures, also known as false teeth, are dental prostheses that replace the natural teeth with ......