Targeting Glucose may Help in Fight Against Seasonal Influenza 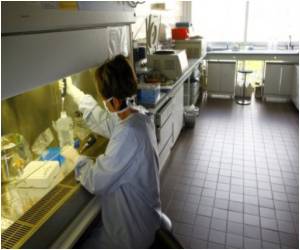 While annual flu shots are based on the U.S. Centers for Disease Control (CDC)'s predictions of the viruses that will be in widest circulation each flu season, the new approach targets one metabolic requirement of all influenza viruses: glucose.


To infect cells, the influenza virus is dependent upon the actions of the cell's own proteins, and so another strategy for slowing viral infection would be to target essential viral needs, for example, their dependence on cellular glucose. Dr. Adamson and Kohio showed that influenza A infection can be controlled in laboratory cultures of mammalian cells by altering glucose metabolism.
Advertisement
When the influenza virus initially infects a cell, and the virus is confined in an endocytic vesicle, the viral proteins HA and M2 use the acidic environment inside the vesicle to fuse the viral lipid envelope with that of the vesicle, and then release the viral genome into the cytosol.

The acidic pH that mediates these important viral process is established and maintained by the cell's vacuolar-type H+ ATPase (V-ATPase) proton pump. The researchers found that this dependence could be used to manipulate the infection's success.

The researchers also demonstrated that the infection could be restored to high levels simply by adding ATP, the major source of energy for cellular reactions, bypassing the need for glucose.

The research was presented at the American Society for Cell Biology (ASCB) annual meeting in New Orleans.

Link Between High Glucose Levels and Diabetes Complications Explored
The way in which high glucose levels drive diabetes-associated complications, including ......

Effectiveness of Influenza Vaccines Can Improve On Usage Of Brief Laser-light Treatment
Vaccine effectiveness can be improved without the adverse effects of chemical additives currently .....