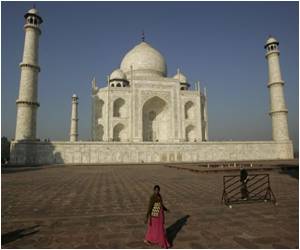 Taj Mahal, universally acclaimed as one of the seven wonders of the world is set to receive a "mud pack treatment" for restoration of its natural sheen.

The white marble mausoleum widely recognized as "the jewel of Muslim art in India and one of the universally admired masterpieces of the world's heritage" was built by the Mughal Emperor Shah Jahan on the banks of the River Yamuna in Agra, Uttar Pradesh, India, in memory of his third wife Mumtaz Mahal in the 17th century.

Though the iconic Taj Mahal woos a large number of visitors every year, large-scale pollution from the industrial city of Agra is posing a great challenge to its appearance.


"Due to increasing pollution in the city, the white marble is yellowing and is losing its sheen. To restore the natural look of the monument the chemical wing of the ASI has started preparations for a mud-pack treatment," Superintending Archaeologist of ASI B M Bhatnagar told PTI.

Pollution not only has an adverse effect on the earth, it also affects all living beings. Test your knowledge regarding the health effects of pollution by taking this quiz.
Advertisement
The treatment takes its cue from the Indian traditional beauty recipe of applying multani mitti (fuller's earth) to faces by women to retain, enhance and restore glow.

As part of the treatment, those areas of the monument that are not exposed to the natural cleansing effect of rain will be plastered by a 2-mm-thick layer of lime-rich clay and left overnight to dry.

"When it dries the flakes are removed from the surface with soft nylon brushes and washed with distilled water to remove impurities sticking to the surface," explained Mr. Bhatnagar.

This is the third time that the Taj Mahal is to receive this kind of treatment.  The previous ones were in 1994, 2001 and 2008.  The last treatment cost around 10.4 lakhs (#24,000) and was carried out by a team of two dozen experts in small sections over a span of six months to ensure that tourist influx did not get affected.

Taj Mahal Replica To Be Built By Dubai

One of the developers of a replica of India's world-famous Taj Mahal said that it is four times the size of the original.
Advertisement
<< Regret, Thought to be Unique to Humans, Seen in Rats: Study
Risk of Brain Cancer and Longer Telomeres >>

Post-Nasal Drip Loram (2 mg) (Lorazepam) A-Z Drug Brands in India Indian Medical Journals Find a Hospital The Essence of Yoga How to Reduce School Bag Weight - Simple Tips Calculate Ideal Weight for Infants Vent Forte (Theophylline) Find a Doctor
This site uses cookies to deliver our services. By using our site, you acknowledge that you have read and understand our Cookie Policy, Privacy Policy, and our Terms of Use