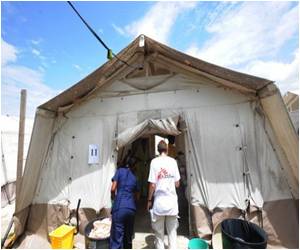 Helping impoverished Haiti end a devastating cholera outbreak is the "moral responsibility" of the United Nations as the blame is on UN peacekeepers, Secretary-General Ban Ki-moon says.

Ban spoke to The Miami Herald ahead of a visit to the Caribbean nation due to begin Monday during which he is set to visit families affected by cholera. The United Nations has so far denied any responsibility over the outbreak that has killed more than 8,000 people and infected more than 700,000.

There had been no cholera in Haiti for at least 150 years until it was allegedly introduced by Nepalese UN peacekeepers sent there in the wake of the devastating January 2010 earthquake.


The source of the cholera epidemic was traced to a river that runs next to a UN camp in the central town of Mirebalais, where Nepalese troops had been based.
Advertisement
The strain of cholera is the same as one endemic in Nepal.

"Regardless of what the legal implication may be, as the secretary-general of the United Nations and as a person, I feel very sad," Ban told the Herald.

"I believe that the international community, including the United Nations, has a moral responsibility to help the Haitian people stem the further spread of this cholera epidemic."

The United Nations has so far failed to offer an apology or compensation for the outbreak, even as three different lawsuits have been filed in US courts.

"The diplomatic difficulties surrounding this issue must be overcome to ensure the Haitian people that the epidemic can be stopped in the shortest possible time frame and pay full compensation for the damages suffered," the UN's human rights expert on Haiti Gustavo Gallon said.

During his visit, Ban plans to focus on getting donors to contribute to a $2.2 billion, 10-year cholera elimination campaign because Haitians have "suffered a lot" from the epidemic.

He said Haiti must address the root causes of cholera -- poor sanitation -- to prevent another epidemic.

"The international community has been struggling to overcome this global financial difficulty, and we have so many crises happening at the same time around the world," said Ban. "That is one reason why we have not been able to effectively mobilize."

In Haiti, Ban will travel to the Centre Department to launch a "total sanitation campaign" with Prime Minister Laurent Lamothe, in an effort to improve sanitation and hygiene in rural areas.

Ban will then meet with President Michel Martelly and lawmakers in the capital Port-au-Prince, as well as meet with leaders from the UN mission MINUSTAH, according to the UN chief's office.

Containing Cholera: An Interview
Cholera, as we know, is an infectious disease caused by the bacterium Vibrio cholerae. The mode of ....

Research Finds YbeY is Essential for Fitness and Virulence of V. Cholerae
The function of YbeY in the cholera bacterium is examined in a new study published on June 5th in .....

Quiz on Cholera
Cholera is an acute diarrheal disease that spreads as an epidemic and claims around one hundred ......