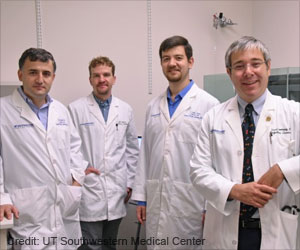 A novel strategy to overcome a key defense that drug-resistant bacteria use to fend off antibiotic attack has been developed by UT Southwestern Medical Center researchers.

Antibiotics are among the most used and abused medications. This article explains some general features about antibiotics.
Advertisement
‘PPMO molecules increase the efficacy of antibiotics against E. coli in cell models from two- to 40-fold. More than 2 million illnesses are caused in the U.S. each year by antibiotic-resistant bacteria. ’
Tweet it Now

The study findings, published online in PLOS Biology, describe how two UT Southwestern research teams created a synthetic compound that blocks a bacterial pump used to expel antibiotics. Bacteria that use these "efflux pumps" and that are treated with the new compound become sensitive to antibiotics they were previously resistant to.


The findings "potentially have huge implications for clinical infectious diseases," said Dr. Trish Perl," Chief of the Division of Infectious Diseases, Professor of Internal Medicine, and holder of the Jay P. Sanford Professorship in Infectious Diseases at UT Southwestern. "In an era when antibiotic choices are increasingly limited because of resistance, and few new agents are being developed, this becomes a novel and exciting tool that needs to be explored."

Your doctor may suggest antibiotics at the first sight of an infection, but how much do you really know about these wonder drugs? Test yourself.
Advertisement
The UTSW experiment focused on Escherichia coli (E. coli) and bacterial pathogens with genetically similar efflux pump complexes. E. coli belongs to a large family of bacteria, Enterobacteriaceae, which plays a major role in human disease and is becoming increasingly resistant to antibiotics.

This is the first time researchers have tailored one of these synthetic compounds, part of a class called PPMOs or peptide-conjugated phosphorodiamidate morpholino oligomers, to target a specific efflux pump found in bacterial cell walls, said Dr. David Greenberg, Associate Professor of Internal Medicine and Microbiology at UT Southwestern and a senior author of the study.

The PPMO compound itself doesn't kill the bacteria, he explained, but keeps it from expelling an antibiotic, allowing the drug to do its job.

"This is just a different strategy," Dr. Greenberg said. "There is a lot of interest in trying to develop new antibiotics, or antibiotics that act in new ways. The other way of thinking about this challenge is to try to make a resistant organism sensitive."

Despite the availability of many excellent antibiotics, bacteria are developing resistance to those most commonly used, forcing physicians to give higher doses or fall back to "last line of defense" drugs, said co-senior author Dr. Erdal Toprak, Assistant Professor of Pharmacology and in the Cecil H. and Ida Green Comprehensive Center for Molecular, Computational, and Systems Biology and a Southwestern Medical Foundation Scholar in Biomedical Research at UT Southwestern.

To attack this problem, two UTSW labs with different focuses came together to seek a solution. Dr. Greenberg had been trying to create new antibiotics using PPMOs - also called anti-sense molecules because they can mimic DNA or RNA and bind to mRNA's genetic sequence like the other half of a zipper, blocking the bacterial machinery for building proteins. Meanwhile, Dr. Toprak's lab was using a device he had developed to study how bacteria become resistant to antibiotics. About a year ago, his research team identified a mutation in E. coli that increased drug sensitivity by blocking an efflux pump complex called AcrAB-TolC. The two scientists and their labs then joined forces to create a PPMO that could target this important E. coli complex.

In fact, Dr. Toprak said, some antibiotics that are never used against E. coli because they were thought to be ineffective killed the bacteria, when used in conjunction with the AcrA-PPMO.

The AcrA-PPMO also was effective against the human pathogens Klebsiella pneumoniae and Salmonella enterica, since those bacteria contain the same efflux pump with a matching gene sequence, Dr. Greenberg said.

The next step will be to study the effect of the AcrA-PPMO in animal models. The researchers also will study whether a PPMO could be effective against other extremely antibiotic-resistant strains of bacteria, he said.

Co-lead authors of the study were Dilay Hazal Ayhan, a visiting researcher, and Yusuf Talha Tamer, a graduate student, both in the Toprak lab. Also contributing was Dr. Seth Daly, a postdoctoral researcher in Internal Medicine. This work was funded by the National Institutes of Health and the University of Texas Endowed Scholars Program.