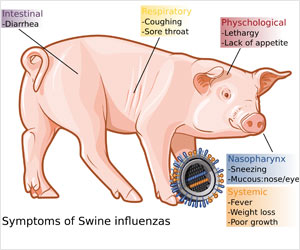 The total number of such cases this year has now climbed over 1,000.

The swine flu toll in Maharashtra and Rajasthan has also crossed 100 and 40 respectively.


A total of 205 swine flu cases have been recorded in Maharashtra, according to the state authorities, while 49 fresh cases were reported in Delhi yesterday with the total number of cases due to the disease going up to 488 this year.
Advertisement
All civic hospitals in Mumbai have been reportedly asked to keep at least two ventilators on standby for H1N1 patients and an adequate stock of Tamiflu has been procured.

The BMC has also started a helpline over the outbreak.

Swine flu is caused by the H1N1 virus. H1N1 symptoms are similar to those produced by other influenza viruses - fever, cough, sore throat, body aches and respiratory problems.

Symptoms for swine flu include high fever, headache, muscle pain, diarrhoea, vomiting, stomach pain and internal and external bleeding. It is transmitted to people primarily from ticks and livestock animals with an incubation period of up to nine days. Human-to-human transmission takes up to two weeks.

Chest Ultrasound an Efficient Tool in the Early Detection of Swine Flu
A new research has demonstrated and recommended the use of Chest Ultrasound for an early and ......

Watch Out For Swine Flu
With the winter winds blowing in, there's always a risk of catching cold. Let the symptoms not ......