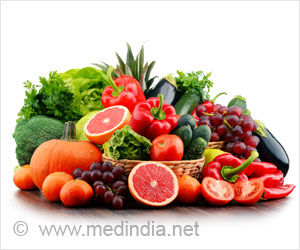 There were 144,181 to women aged 35 and over and the births were three times more in mothers aged 25 to 34 than to those under 25.
Advertisement
‘Report released by the Union Health Minister Harsh Vardhan states that 98.4% of adults in India have an inadequate consumption of fruits and vegetables.’
Read More..


Report released by the Union Health Minister Harsh Vardhan states that 98.4% of adults in India have an inadequate consumption of fruits and vegetables.

While the recommended number of servings of fruits and vegetables is at least five, the survey found that the mean serving of fruits and/or vegetables consumed in a day was 1.7.

Notable findings of the survey are -

More than two in five adults (41.3%) and one in four adolescents (25.2%) are insufficiently physically active.

One in every three adults and more than one-fourth proportion of surveyed men used tobacco in any form and consumed alcohol.

Only 1.7% of surveyed population aged 30-69 (men and women) years had ever undergone screening for oral cancer.

48.3% adolescents had skipped breakfast on at least one day in the past 30 days.

25.2% adolescents did not meet the WHO recommended levels of physical activity.

The Health Minister states that "The country is facing epidemiologic transition towards NCD (non-communicable diseases) and their occurrence in younger age groups among the poorer sections of the society remains a matter of concern demanding greater attention."

Recommendations included setting up a national NCD surveillance department/unit that would periodically gather, analyze and report timely data for interventions and actions. The development of a national NCD research plan for at least ten years was also stressed to guide research and funding priorities to fill the knowledge and operational gaps in the policies and program requirements.

A modified diet rich in Folate, Vitamin B12 and Iron is essential for the rapid rise in hemoglobin level.
Advertisement
<< Covid-19 Warnings First Posted on Twitter Even Before Outbre...
Adhering to a Dietary Regimen - The Real Issue >>