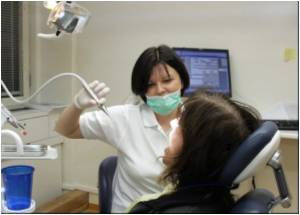 More than one in ten dentists in the UK are earning more than the Prime Minister - and hundreds are taking home more than 300,000 pounds, new research has indicated.

The number of dentists smashing through the 300,000 pounds barrier has gone up by 10 per cent in the past year as their pay continues to soar on the back of 'botched' contracts.


Campaigners say the rise is 'unjustified, particularly during a time of drastic NHS cuts with thousands of doctors and nurses' posts at risk.

Dentists are upping their salaries by carrying out more complicated treatments such as canal surgery, figures show.

Bruxism is the unconscious clenching or grinding of teeth, during sleep. Nocturnal teeth grinding is one of the most common sleep disorders
Advertisement
Advertisement

It is commonly recommended that you visit the dentist twice a year to clean your teeth and gums and also do ...
This site uses cookies to deliver our services.By using our site, you acknowledge that you have read and understand our Cookie Policy, Privacy Policy, and our Terms of Use  Ok, Got it. Close
×