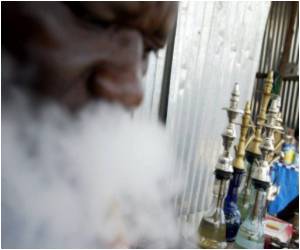 Cafes in Khartoum have been forced to implement a ban on the smoking of water pipes, a popular activity throughout the Arab world, in a move welcomed by Sudan's President Omar al-Bashir.

"The police came several days ago and told us that it was no longer possible to serve shisha to our clients," said one waiter at a popular cafe in the Sudanese capital.

The Khartoum authorities had instructed cafe owners earlier this year not to serve water pipes, also known as nargileh or shisha, to women. But now the ban applies to men as well.


"The police came and made us sign a document in which we agreed to no longer serve nargileh," Salah el-Amin, manager of the upmarket Lisamin Safari Hotel, told AFP.

At the inauguration of a mosque in the capital last month, Bashir welcomed the Khartoum governorate's decision to ban water pipes from public places and urged the police to reinforce the maintenance of "public morality," according to media reports.

Do you smoke cigarettes daily? Use medindia smoking risk calculator and calculate your reduced Life Span due to Smoking.
Advertisement
<< Facebook Endeavours to Control Cyber Bullying Instances
Building Muscle Size is Possible Even With Lighter Weights ... >>

Approximately half the smokers die due to smoking -related diseases. But it is not just the smokers who are at the receiving end. The passive smokers too, often pay a heavy price. If you still have not 'kicked the butt', learn more horrifying facts about smoking by participating in the following quiz.