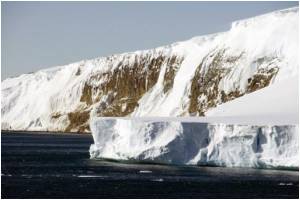 Recent study has shed light on why and how the Antarctic sea ice cover has increased under the effects of climate change.

The first direct evidence that marked changes to Antarctic sea ice drift have occurred over the last 20 years, in response to changing winds, has been published by researchers from NERC's British Antarctic Survey (BAS) and NASA's Jet Propulsion Laboratory (JPL), Pasadena California.

Maps created by JPL using over 5 million individual daily ice motion measurements captured over a period of 19 years by four US Defense Meteorological satellites show, for the first time, the long-term changes in sea ice drift around Antarctica.


"Until now these changes in ice drift were only speculated upon, using computer models of Antarctic winds. This study of direct satellite observations shows the complexity of climate change," lead author, Dr Paul Holland of BAS said.

The International Conference on Global Warming (GCGW-2012) will be held in Istanbul, Turkey on July 8-12, 2012. Take this quiz to learn what causes global warming, how it can affect your health, and what can be your contribution to contain it.
Advertisement
"The total Antarctic sea-ice cover is increasing slowly, but individual regions are actually experiencing much larger gains and losses that are almost offsetting each other overall. We now know that these regional changes are caused by changes in the winds, which in turn affect the ice cover through changes in both ice drift and air temperature. The changes in ice drift also suggest large changes in the ocean surrounding Antarctica, which is very sensitive to the cold and salty water produced by sea-ice growth.

"Sea ice is constantly on the move; around Antarctica the ice is blown away from the continent by strong northward winds. Since 1992 this ice drift has changed. In some areas the export of ice away from Antarctica has doubled, while in others it has decreased significantly," he noted.

The new research also helps explain why observed changes in the amount of sea-ice cover are so different in the two Polar Regions. The Arctic has experienced dramatic ice losses in recent decades while the overall ice extent in the Antarctic has increased slightly.

However, this small Antarctic increase is actually the result of much larger regional increases and decreases, which are now shown to be caused by wind-driven changes. In places, increased northward winds have caused the sea-ice cover to expand outwards from Antarctica.

The Arctic Ocean is surrounded by land, so changed winds cannot cause Arctic ice to expand in the same way.

"The Antarctic sea ice cover interacts with the global climate system very differently than that of the Arctic, and these results highlight the sensitivity of the Antarctic ice coverage to changes in the strength of the winds around the continent," said Dr Ron Kwok, JPL.

There has been contrasting climate change observed across the Antarctic in recent decades. The Antarctic Peninsula has warmed as much as anywhere in the Southern Hemisphere, while East Antarctica has shown little change or even a small cooling around the coast.

The new research improves understanding of present and future climate change. It is important to distinguish between the Antarctic Ice Sheet - glacial ice - which is losing volume, and Antarctic sea ice - frozen seawater - which is expanding.

The study was published this week in the journal Nature Geoscience.

Selfie Addiction Calculator Find a Hospital Blood Donation - Recipients The Essence of Yoga Indian Medical Journals Drug - Food Interactions Blood Pressure Calculator Blood - Sugar Chart Vent Forte (Theophylline) Noscaphene (Noscapine)
This site uses cookies to deliver our services. By using our site, you acknowledge that you have read and understand our Cookie Policy, Privacy Policy, and our Terms of Use