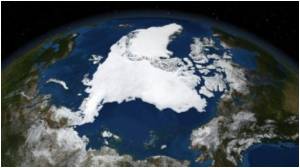 But the researchers noted that sea ice in the Arctic has melted at a much faster rate than it has expanded in the Southern Ocean.


The study revealed that from 1978 to 2010 the total extent of sea ice surrounding Antarctica in the Southern Ocean grew by roughly 6,600 square miles every year, an area larger than the state of Connecticut. And previous research by the same researchers indicates that this rate of increase has recently accelerated, up from an average rate of almost 4,300 square miles per year from 1978 to 2006.

Thousands of young Pacific walruses were trampled to death by stampedes in the Arctic this past summer, due to the fast-melting sea ice.
Advertisement
"There's been an overall increase in the sea ice cover in the Antarctic, which is the opposite of what is happening in the Arctic," said lead author Claire Parkinson, a climate scientist with NASA's Goddard Space Flight Center, Greenbelt, Md.

"However, this growth rate is not nearly as large as the decrease in the Arctic," Parkinson stated.

The Earth's poles have very different geographies. The Arctic Ocean is surrounded by North America, Greenland and Eurasia. These large landmasses trap most of the sea ice, which builds up and retreats with each yearly freeze-and-melt cycle. But a large fraction of the older, thicker Arctic sea ice has disappeared over the last three decades. The shrinking summer ice cover has exposed dark ocean water that absorbs sunlight and warms up, leading to more ice loss.

On the opposite side of the planet, Antarctica is a continent circled by open waters that let sea ice expand during the winter but also offer less shelter during the melt season. Most of the Southern Ocean's frozen cover grows and retreats every year, leading to little perennial sea ice in Antarctica.

Most of the growth from 1978 to 2010 occurred in the Ross Sea, which gained a little under 5,300 square miles of sea ice per year, with more modest increases in the Weddell Sea and Indian Ocean. At the same time, the region of the Bellingshausen and Amundsen Seas lost an average of about 3,200 square miles of ice every year.

Parkinson and Cavalieri said that the mixed pattern of ice growth and ice loss around the Southern Ocean could be due to changes in atmospheric circulation. Recent research points at the depleted ozone layer over Antarctica as a possible culprit.

The numbers for the southernmost ocean, however, pale in comparison with the rates at which the Arctic has been losing sea ice - the extent of the ice cover of the Arctic Ocean in September 2012 was 1.32 million square miles below the average September extent from 1979 to 2000. The lost ice area is equivalent to roughly two Alaskas.

Some scientists believe that without action to stave off climate change, all of the year-round ice in the Arctic could be gone by as early as 2030, thanks to resulting rise in sea
Advertisement
<< Chemotherapy Drug Causes Heart Failure
Already Tech-savvy Are 3 and 4-year-old Kids >>

An Australian researcher has suggested that a rise of about 50 to 100 centimeters above the 1920 sea level, may be enough to threaten the west Antarctic ice sheets.
Advertisement
News A-Z
A B C D E F G H I J K L M N O P Q R S T U V W X Y Z
What's New on Medindia