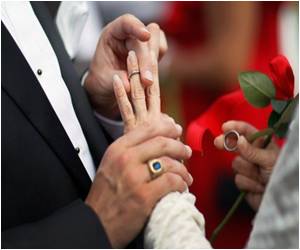 More than one third of US marriages begin with online dating, says research.

Online dating has ballooned into a billion dollar industry and the Internet "may be altering the dynamics and outcome of marriage itself," said the study by US researchers in the Proceedings of the National Academy of Sciences.

The study is based on a nationally representative survey of 19,131 people who married between 2005 and 2012.


"We found evidence for a dramatic shift since the advent of the Internet in how people are meeting their spouse," said the study, led by John Cacioppo of the University of Chicago's Department of Psychology.
Advertisement
People who reported meeting their spouse online tended to be age 30-49 and of higher income brackets than those who met their spouses offline, the survey found.

So who is happier?

The most satisfied among those who met offline were couples who grew up together or met through schools, social gatherings or places of worship.

The lowest satisfaction rates were in people who met through family, work, bars/clubs or blind dates.

The survey was commissioned by eHarmony.com, the site that attracted one quarter of all online marriages according to the research.

Cacioppo acknowledged being a "paid scientific advisor" for the website, but the researchers used study procedures provided by the Journal of the American Medical Association and agreed to oversight by independent statisticians.

"These data suggest that the Internet may be altering the dynamics and outcomes of marriage itself," said Cacioppo.

"It is possible that individuals who met their spouse online may be different in personality, motivation to form a long-term marital relationship, or some other factor."