Protest Against Gay Marriage In Paris Gets Heavy Security 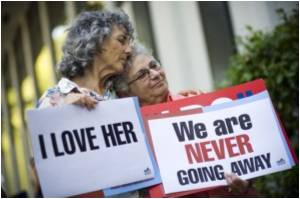 Ahead of a mass protest in Paris against a new gay marriage law, with hardline activists expected to mingle among 200,000 demonstratorsl, the French police were on alert.

Trouble started late Saturday when 50 opponents of gay marriage were arrested in central Paris, according to police.

The demonstration on Saturday took place along the French capital's iconic Champs-Elysees, a week after France became the 14th country to legalise same-sex marriage.


Police expect 200,000 people to attend the rally on Sunday, with the crowds expected to include hundreds of "ultras", who authorities believe could cause trouble.
Advertisement
President Francois Hollande signed the gay marriage bill into law on May 18 following months of bitter debate and demonstrations.

France's Constitutional Council threw out a legal challenge by the right-wing opposition to the new bill, which also legalises gay adoption.

The issue of gay marriage has divided France, which is officially secular but overwhelmingly Catholic.

While rights groups have hailed the move, opponents of the measures have vowed to fight on and on Saturday evening a group of protesters chained themselves to metal barriers they placed in the middle of the busy Champs-Elysees.

Some fired smoke cannisters before police moved in and arrested them.

At the same time dozens more protesters assembled on the pavement waving flags.

In total 50 people were held and a van carrying masks, banners and smoke bombs was seized, police said.

Some 4,500 police and armed gendarmes will be deployed to handle four marches in the French capital.

The police received criticism for their handling of recent violence on the streets of Paris after a celebration near the Eiffel Tower by Paris Saint-Germain football fans, to mark the club's league victory, turned violent, with some tourists attacked in the heart of the city.

In a final essay on his website, Venner had railed against France's adoption of the "vile law" legalising gay marriage and adoption.

Gay rights watchdog SOS Homophobie has hailed the legalisation of gay marriage while decrying the wave of homophobic protest which has followed it.

"Our country has taken a great step forward today although it's regrettable that it was taken in a climate of bad faith and homophobic violence," it said.

The most radical protesters have joined a nebulous umbrella group "Printemps français" (French spring), which the French interior ministry has threatened to dissolve due to its inflammatory rhetoric.

Britain's Gay Marriage Bill Set to Pass Crucial Hurdle in Parliament
After Prime Minister David Cameron was forced to strike a last-minute deal with the opposition to .....