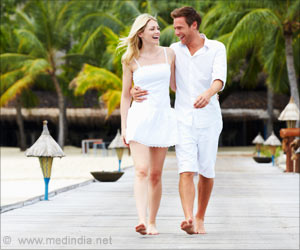 Couples are more likely to sleep in sync when the wife is more satisfied in the marriage, a new study has found.

"Most of what is known about sleep comes from studying it at the individual level; however, for most adults, sleep is a shared behavior between bed partners," said lead author Heather Gunn, PhD, postdoctoral scholar at the University of Pittsburgh. "How couples sleep together may influence and be influenced by their relationship functioning."


The research abstract was published recently in an online supplement of the journal Sleep and was presented Wednesday, June 4, in Minneapolis, Minnesota, at SLEEP 2014, the 28th annual meeting of the Associated Professional Sleep Societies LLC.

Obstructive sleep apnea should be suspected in overweight middle aged adults who snore loudly and which can cause interruption of breathing for 10 seconds or more and this results in reduced blood o
Advertisement
The study group comprised 46 couples who completed relationship assessments. Objective sleep data also were gathered by actigraphy over a 10-day period.

"The sleep of married couples is more in sync on a minute-by-minute basis than the sleep of random individuals," said Gunn. "This suggests that our sleep patterns are regulated not only by when we sleep, but also by with whom we sleep."

Insomnia may be due to physiological, psychological, physical or environmental factors. Insomnia should be treated promptly in order to improve the quality of life and prevent other health problems.
Advertisement
<< Activation of the Immune System Could Treat Obesity and Dia...
Exposure to Certain Bacteria may Protect Toddlers from Whee... >>

Selfie Addiction Calculator Find a Doctor Blood Pressure Calculator Calculate Ideal Weight for Infants Post-Nasal Drip Drug Side Effects Calculator Daily Calorie Requirements Iron Intake Calculator Sanatogen Diaphragmatic Hernia
This site uses cookies to deliver our services.By using our site, you acknowledge that you have read and understand our Cookie Policy, Privacy Policy, and our Terms of Use  Ok, Got it. Close
×