Stretching Prior to Distance Running may Hamper Endurance 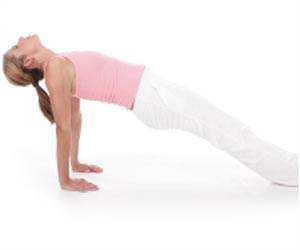 Distance runners who stretch before running, a new study suggests, may not to be able run as far - even though they spend more energy doing it.

The study was published by Lippincott Williams Wilkins, a part of Wolters Kluwer Health, a leading provider of information and business intelligence for students, professionals, and institutions in medicine, nursing, allied health, and pharmacy.

"Our results suggest that stretching before an endurance event may lower endurance performance and increase the energy cost of running," wrote Jacob M. Wilson and colleagues of The Florida State University.


Ten male collegiate runners performed a 60-minute treadmill run on two different occasions: once after stretching and once without stretching. The 16-minute stretching regimen consisted of static stretching-stretching a muscle to its maximum length and holding it-of the major muscles of the lower body.
Advertisement
The sessions were performed in random order. At each time, the runners were instructed to run as far as possible; however, they were unable to view their running distance or speed.

Even though the athletes covered less distance, the energy cost of running was significantly greater after stretching. On average, the runners burned about five percent more calories in the run performed after static stretching.

The differences may not seem great-on average, running distance decreased by 0.2 kilometer after stretching while energy expenditure increased by 20 calories.

However, for highly trained runners, those differences are more than enough to affect competitive performance.

Stretching may Take Care of Postural Issues
Stretching routines in any exercise regimen are vital because they prevent injury and increase the ....

Pre-eclampsia Risk During Pregnancy Better Handled by Stretching Than Walking
Stretching exercises may be better than walking when it comes to reducing the risk of preeclampsia ....