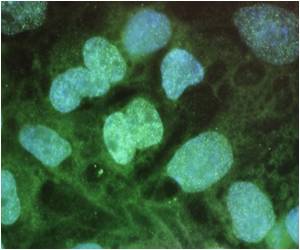 Stem cells appear to be the source of new tumor growth after chemotherapy, say scientists.

The discovery should lead to new drugs targeting stem cells that cause tumours to reappear after cancer therapy, the teams argued in three scientific papers published simultaneously in the journals Nature and Science.

"The hypothesis (that cancer stem cells exist) has been around now for some time. Hopefully these three papers now make an end to the discussion," Dutch researcher Hugo Snippert told AFP.


All the studies were conducted on lab mice.

Some experts have maintained that tumours are comprised of masses of cancer cells that are all the same, and all dividing.

Cancer, is the second most leading cause of death worldwide. Cancer is not just one disease but many diseases. There are more than 100 different types of cancer. Take this quiz on and test how much you know about cancer.
Advertisement
But Snippert said the latest papers clearly show a hierarchy of cells in tumours, with different functions -- including stem cells that act as cancer cell factories.

Stem cells are infant cells that develop into specialised tissues of the body, touted by medicine as a future source from which to replenish damaged tissue.

In the case of intestinal cancer, a healthy stem cell mutates to create a "cell of origin" from which a tumour grows, said Snippert. The tumour contains stem cells which then create new cancer cells.

Cancer stem cells must now be targeted for drug research, argued Snippert, a member of the University Medical Center Utrecht research team which focused on intestinal cancer and published its findings in Science.

"That is why it is important now to have a look at cancer stem cells, comparing them to normal stem cells to find the differences."

"This study serves as a proof of principle that in at least some solid tumours functional cancer stem cells exist," researcher Luis Parada of the University of Texas Southwestern Medical Center told AFP.

Also writing in Nature, a separate team in Belgium and the UK found a sub-population of tumour cells with stem-like properties in skin cancer.

"Taken together these reports provide evidence that point towards the existence of cells that may represent cancer stem cells," said a Nature press statement.

Snippert said the latest technology has allowed the scientists to examine tumour cancer growth in as natural a state as possible, unlike earlier studies that involved tumour transplants in lab mice.

The Dutch team was able to breed special mice in which different tumour cells displayed different colours which could then be studied under a microscope.

"Because of the colours we could visualise everything within one and the same tumour in its original mouse at the original position where the tumour was formed," Snippert said.

"It is more natural... as it would behave normally in patients."

The three teams studied different organs using somewhat different techniques, but all with technology that allowed them to let the tumours grow undisturbed, said Snippert.

"Better understanding of the cancer stem cells will be critical for re-evaluation of existing therapies and development of new ones," added Parada.

Did u know that simple changes in lifestyle could lower your cancer risks? Find out how!
Advertisement
<< Novel Treatment Target for Deadly Brain Tumors Identified
Helpline for Lesbians >>