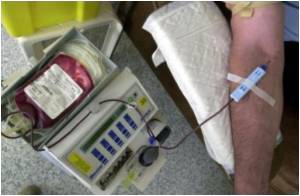 Ayushmaan Khurana, who had played a role of a sperm donor in this year's hit film "Vicky Donor", has turned into a blood donor.

The young actor, who was in hometown Chandigarh, donated blood at a camp in his alma mater Panjab University.

Ayushmaan was the first to donate blood at the camp organised by the university's English department.


The actor, who had donated blood five times before, also inspired students to join the voluntary blood donation movement.

The actor shot into fame some months ago with the success of "Vicky Donor", which dealt with the taboo subject of sperm donation.

Scientists at the Stanford University School of Medicine say that the hair sheep, a less-hirsute version of the familiar woolly barnyard resident, may be key to better diagnostic tests
Advertisement
Ayushmaan completed his post-graduation from Panjab University's School of Communication Studies a few years ago before becoming a radio jockey and a TV show host.

China should compensate thousands of people infected with the HIV virus through government-backed blood trading and be given access to the latest anti-AIDS drugs, a top UN official said Thursday.
Advertisement
<< Lymph Node Dissection In Breast Cancer Has High Advantage
Mobile Phones May Provide Feasible Method To Treat Rheumato... >>

Thalassemia
News Archive
News Resource
Advertisement
News Category
How to Reduce Needle Anxiety in Children? Tobacco Addiction: Here's How to Break the Habit Parents are 'Winging It' on Their Kids' Mobile Use Ankle and Ankle Movements While Riding an Hoverboard Is It Healthy to Let Your Mind Wander?
More News
Sign up for Wellness Consult a Doctor Sign up for Selfcare