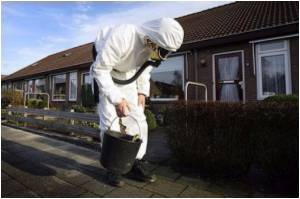 For the first time, a Spanish court has ordered a firm to compensate the residents whose health was affected by the exposure to asbestos from one of its factories.

Spanish construction materials firm Uralita was ordered to pay 3.9 million euros (4.9 million dollars) to 45 people who for decades lived near its factory in a Barcelona suburb, for "damage to the lungs, leading in some cases to death", according to the ruling obtained by AFP Wednesday.

The financial compensation will be shared between residents who became sick because of their asbestos exposure, and their families in the case of victims who have died.


It is the first time in Spain that a court orders a company to compensate local residents, as opposed to employees, for health problems related to asbestos exposure, according to daily newspaper El Pais.

The mystery of why asbestos causes cancer has now been solved.
Advertisement
The factory, which made cement, used asbestos for years until the use of the mineral which has been found to cause cancer was banned in 2001.

Uralita said it will appeal the Madrid court's decision.

Asbestos is a naturally occurring mineral that was once used widely to fireproof roofs, insulation and other building materials.

The US Environmental Protection Agency, the International Agency for Research on Cancer, and the U.S. National Toxicology Program have declared all forms of asbestos to be proven human carcinogens.

In additional to cancer, asbestos exposure has been found to cause asbestosis, a progressive, debilitating lung disease.

Homeowners may Not be Able to Identify Asbestos in Their Homes