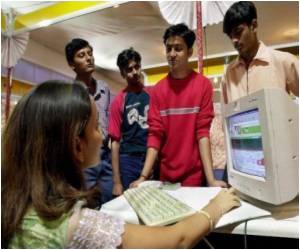 Social media networks such as Facebook, Twitter and Internet blogs, that have been under western domination, are succumbing to Asian influence, a development that has drawn the attention of major players.

With more than 220 million bloggers in China alone and nearly three out of five people in Singapore having a Facebook account, Asia is presenting a huge commercial opportunity for online advertising.

Society should be aware of the potentially harmful effects of the Internet on the brain, leading neuroscientist Baroness Susan Greenfield, one of Britain's most prominent
Advertisement


"Asia is... the most exciting part of the world for what's going on in social media," he told AFP on the sidelines of a social media forum in Singapore.

Internet Security Expert Educates About the Risks of Social Networking

Internet security specialist Thomas Ryan, has shown some of the inherent dangers of social networking and will attend the 'Black Hat Technical Security Conference' in Las Vegas.
Advertisement
Facebook launched an Asian sales office in Singapore this month in order to to be better placed to sell ads to companies aiming for the region's consumers.

"The Asian market's a very, very big market for us," said Blake Chandlee, Facebook's commercial director for regions outside North America and western Europe. "It's an enormous opportunity for us."

Chandlee said Asia was the fastest-growing among Facebook's geographical markets, or "theatres", despite restrictions on access in China.

Crampton said the growing number of Asians connected to the Internet was a key driver behind the region's social media craze.

A report in July by research firm Nielsen said that "while the US pioneered much of the early Web 2.0 and social media innovation, Asia is playing no small role in shaping -- and in some cases leading -- the new social media landscape."

As of December 2009, China had 221 million bloggers or more than twice the number in the United States, it added.

Crampton noted that Facebook's ranking of leading markets showed Indonesia was already a close third behind the United States and Britain in monthly active subscribers -- and poised to take second spot within months.

Facebook refuses to give regional or country breakdowns, saying only that it has more than 500 million users worldwide.

Data from market research firm Inside Network estimated that monthly active Asia-Pacific users of Facebook numbered 117 million, or more than 20 percent of the global figure.

In June this year Asians also "tweeted" the most on micro-blogging platform Twitter, outpacing the United States, according to data from Internet research company Semiocast.

"Twitter users in Asia, mainly located in Japan, Indonesia and South Korea, account for 37 percent of tweets," said Semiocast, which studied 2.9 million tweets over a period of 24 hours on June 22.

It said US-generated tweets now account for only 25 percent of messages on Twitter, down from 30 percent in March.

Asia-Pacific users are also creating social media content "to an extent that is unheard of almost anywhere in the world," Crampton added.

And despite China's ban on Facebook and Twitter, the nation still boasts the largest number of social media users in any country thanks to locally-developed substitutes, the Hong Kong-based Crampton said.

More Web Users In China Than Entire US Population: Report

According to the state media, the number of Internet users in China is now greater than the entire population of the United States, after rising to 338 million by the end of June.
Advertisement
Advertisement

Read on for the different kinds of relationship problems and top tips and advice to help your relationship ...
This site uses cookies to deliver our services.By using our site, you acknowledge that you have read and understand our Cookie Policy, Privacy Policy, and our Terms of Use  Ok, Got it. Close
×