Former Hunter On a 'Save the Wildlife' Campaign 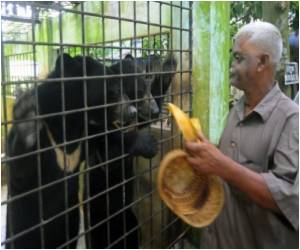 Sitesh Ranjan Deb made a life change from hunter to conservationist when a Himalayan black bear attacked him twenty years ago while he was out hunting down deer.

Sitesh, from northeastern Bangladesh, stumbled on the sleeping beast. It lashed out, severely damaging his face and one eye, and only emergency surgery saved his life.


During many long months of recovery, Sitesh decided to give up hunting -- his family's profession for generations -- in favour of saving ill and endangered animals.


He has since become the nation's leading conservationist, devoted to saving what remains of the Lawachara forest, a threatened national reserve near his home.

"I lost one eye in that attack, but it changed the way I wanted to relate to wildlife," he told AFP at his home in Srimongal, where he runs a renowned animal rescue centre.

"Many of the species I grew up with -- wild boars, leopards -- are hardly ever seen now. These animals are in their last days.

"Illegal logging has damaged the forest so much there is no food for the animals. Unless we act now, they'll be gone forever in a few years."

Sitesh, 62, nurses injured wild animals brought to him by villagers back to health and also appears regularly on television shows campaigning for better public attitudes towards wild animals.

If possible, he releases the animals back into the jungle, while others he keeps in his small zoo -- including two hand-raised Himalayan black bears after the mother was killed, a 5.5 metre (18 foot) python and a rare albino fishing cat.

Even Sitesh's family home is filled with animals, the more "difficult cases" which need 24-hour care. Two jungle cat cubs, a baby python and a badly-injured Slow Loris (a primate species) are currently in residence.

"So far, I've freed more than 1,000 animals and that's not counting 2,000 birds," he said, displaying photographs of many former patients.

For some animals, such as the two hand-reared two-year-old bears, who have lived with Sitesh since their mother was beaten to death by local villagers, his zoo may be their final home.

"I can't set the bears free as the jungles are no longer large enough to provide them with food and there are too many poachers," he said sadly, as he fed Rambo and Jumbo slices of pumpkin.

Some 200 kilometres (125 miles) northeast of the capital Dhaka, Lawachara forest was once home to more than 460 species of animal, according to the government.

But decades of illegal logging and human encroachment for farming mean only 1,250 hectares (five square miles) of forest now remain, and even there, the tree-cover is not dense enough to support many species.

Experts say it has shrunk by 90 percent as a three-fold increase in Bangladesh's population in the last four decades has taken its toll, turning previously dense forest into small islands surrounded by villages.

According to the local forest ranger, A.K.M Azharul Islam, well-organised illegal logging gangs are making it difficult for his team to protect the remaining forest.

"There are so many illegal loggers and they're armed with sophisticated weapons -- I've only got 18 men and we're mostly unarmed," he said. "In June, three forest rangers were beaten up and seriously injured by loggers."

Islam says Sitesh helps the forest rangers -- tipping them off with any intelligence about poachers or when villagers may be killing endangered wildlife.

"I've never seen anyone so dedicated to nursing wild animals, he helps us when animals are found hurt by illegal loggers or poachers," Islam said.

At Sitesh's mini-zoo, a baby python -- which he hand-raised on insects after workers found it in a tea plantation -- is ready to be released, and he carefully carries the three-foot-long snake deep into the remaining jungle.

Every time he frees an animal, he invites local politicians, journalists and forestry officials to draw attention to the plight of the forest and its inhabitants.

"To save these valuable gifts of nature, you don't need to go to anyone else for help. You just do it," he said, as he nonchalantly flipped the baby python away and watched it glide into the jungle.

A New Atlas That Shows 'Efficient Conservation Efforts' Released by UN
A new atlas that shows how conservation efforts can most efficiently make use of limited resources has been released by the UN Environment Programme .
READ MORE

Earth's Biodiversity At Stake by Loss of Even One Species
University of California scientists have revealed how to safeguard the planet's biodiversity.
READ MORE