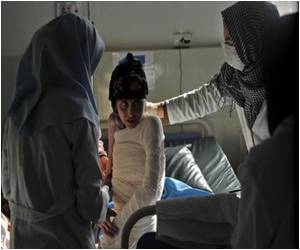 Aatifa's fragile frame is meticulously enveloped in thick bandages, a painful outcome of setting herself on fire. Writhing in pain her shrieks of `Allah` echoes about the hospital ward where surgeons prepare to graft skin back on to her skeletal torso.

Her wide blue eyes alternating between flashes of anger and wells of tears, the 16-year-old Afghan girl struggles to explain what led her to douse her own body in petrol, step outside and light a match.

Teenage has a negative impact on teenagers' education, health and the society at large. The impact of this unplanned pregnancy affects both mother and child.
Advertisement

Married at the age of 14, the young carpet-weaver, who has nine brothers and sisters, said her mother-in-law criticised her housework and encouraged her mechanic husband to beat her for allowing her mother to visit too often.


She complained to authorities but was berated for causing trouble. Later told that her husband hated her and would marry a second woman, she swung between anger and depression before carrying out her masochistic deed.

Adolescent depression is an ailment that occurs during the teenage characterized by persistent melancholy, disappointment and loss of self-esteem.
Advertisement
Aatifa poured petrol over her head and, once outside her home, lit the flames that engulfed two thirds of her body. Her brother found her and smothered her with his clothes before neighbours took her to hospital.

"I just wanted to kill myself, this was my goal," she said, her bone-thin arm etched with flaring purple burn scars. "What can I do? I'm not useful anymore. I want to get a divorce, it's better to stop everything."

Bound by early marriage into a life of domestic disharmony, dozens of girls like Aatifa in Afghanistan's sophisticated but conservative main western city of Herat are choosing a brutal form of escape by setting themselves on fire.

In the past one year alone, doctors at a burns unit at the city hospital have seen 83 cases of self-immolation, with nearly two-thirds proving fatal.

The disturbing phenomenon is considered to be a cultural import from neighbouring Iran. But feuding between poor and uneducated families who marry off their daughters as young teens is usually at the heart of the problem.

"Sometimes it's for very small reason they burn themselves, and most of them complain about the in-law's family," said chief of plastic and reconstructive surgery at the burns unit, Ghafar Khan Bawa.

Police, tribal elders, Mullahs and courts all exist to resolve family disputes which are common within Afghanistan's impoverished and illiterate societies. But it is considered culturally taboo for a woman to complain.

"There's a defect in the system because a woman cannot complain here. And if they were not accepted before burning themselves, then how will they be accepted with disfigurement and deformities and disabilities?" added Bawa.

Sitting propped up on a pillow at home across town, 18-year-old Zarkhuna's occasional smile is largely concealed by an enveloping neck brace, while her body scarred by 65 percent burns is clothed in a black burqa and red blanket.

She said the family of her husband, a rickshaw driver, had seemed nice before marriage, but when his mother and sister moved into their family compound fighting erupted.

Now banned from seeing their 10-month-old baby since she set herself on fire four months ago, she said she hopes not to divorce, but for her near-fatal action to provoke a peace settlement between the families.

"My husband wasn't cruel to me. But my mother and sister-in-law were complaining all the time about my job -- they became jealous," she said.

"The mother and sister wanted me to be under their control not under my husband's. If he behaves nicely with me I will continue with him."

Her father has said she must not take the case to the authorities, but leave their fate to God's will.

Herati women's rights advocate Suraya Pakzad said that early marriage and family feuds commonly caused dangerous levels of stress for women in the home, with many too young to cope with the wifely roles expected of them.

"Maybe not all of them decide to die, it's just a warning for their family to stop, and they never thought fire would immediately go to all of their body," said the head of the Voice of Women's Organisation in Herat.

The organisation operates two shelters for women, although all cases must be referred through the government. Once they realise there could be other options for escape she said the self-harming teens all wish things could be different.

"Whenever we meet them and talk to them they say they really regret what they did."

Depression is one of the most common mental disorders affecting approximately 340 million people in the world. No one is immune from depression - it occurs in people of all social classes, all countries and all cultural settings.
Advertisement
Advertisement
This site uses cookies to deliver our services.By using our site, you acknowledge that you have read and understand our Cookie Policy, Privacy Policy, and our Terms of Use  Ok, Got it. Close
×