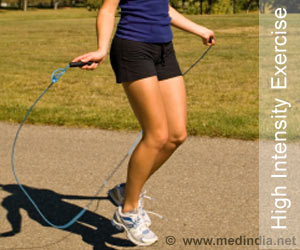 A great cost-effective way to increase the accuracy of sports screening would be the use of echocardiography with conventional M-mode and 2D modalities, a new study suggested.

EuroEcho-Imaging 2013 is the official annual meeting of the European Association of Cardiovascular Imaging (EACVI), a registered branch of the European Society of Cardiology (ESC). It takes place during 11-14 December in Istanbul, Turkey, at the Istanbul Lutfi Kırdar Convention & Exhibition Centre (ICEC).

Dr Kisko said: "Trained athletes are generally considered the healthiest people in society, seemingly invulnerable and often capable of extraordinary physical achievement. Their unexpected death during training or competition is a tragic event that assumes a high public profile and continues to have a considerable impact on the general public and the medical community."


He added: "The first historically recorded sports-related death was in courier-runner Pheidippides (530 BC-490 BC). Recent publicised deaths have occurred in 30-year-old Claire Squires, who was competing in the London Marathon on 22 April 2012, Piermario Morosini, an Italian football striker who died aged 25 due to cardiac arrest during the match almost a week earlier, and Michael Michalevitch, 29, who died suddenly while participating in the Tel-Aviv marathon on 15 March 2013.
Advertisement
Dr Kisko continued: "Sudden cardiac death (SCD) in young and apparently healthy athletes has long been considered rare but there is evidence that deaths occur as often as once every three days.A These deaths are usually caused by undiagnosed cardiovascular abnormalities but diagnostic screening is considered too expensive and is delivered sporadically. The medical community must become more involved in reducing the incidence and prevalence of SCD through an improved pre-participation screening process."

The "ideal" pre-participation screening (PPS) protocol in sports is cost-effective, has high diagnostic accuracy and is feasible in large populations. The European PPS protocol consists of personal and family history, physical examination and 12-lead electrocardiogram (ECG). There is controversy over whether adding echocardiography (ECHO) to the protocol increases the accuracy of screening and is cost-effective.

In the current pilot study, 500 healthy athletes aged 16-32 years (average age 21 ± 5 years) including 446 males and 54 females (8:1) participating in sports like football, athletics, handball, cycling, basketball and gymnastics were examined in 2011-2013. All athletes were screened according to the European PPS protocol. Cardiovascular abnormalities were not detected in any of the athletes.

Conventional ECHO exams (M-mode and 2D modalities) were performed in all athletes. Cardiovascular abnormalities were found in 14 cases (2.8%). Seven (1.4%) had mitral valve prolapse (hemodynamically significant in 1 case), 3 (0.6%) had bicuspid aortic valve (significant aortic stenosis in 1 case) and 4 (0.8%) had myocarditis, myocardial bridging, noncompaction of the left ventricle or coronary artery fistula.

Dr Kisko said: "In 4 athletes the abnormalities we found with conventional ECHO required them to stop sports temporarily or permanently. The standard protocol was not accurate or sensitive enough to pick up potentially life threatening cardiovascular defects. But the addition of M-mode and 2D ECHO exams, which are quick and simple to perform and quite inexpensive, picked up abnormalities in 14 athletes."

He added: "Pre-participation sports screening is not very popular with athletes because they do not want to be excluded from their sport if a cardiac abnormality is found. But when an apparently healthy athlete dies suddenly it is a tragic event which may lead the public to believe that exercise is not good for them. Our small pilot study shows that screening with conventional M-mode and 2D ECHO modalities added to the standard protocol is more powerful for identifying cardiac abnormalities that are otherwise undetectable and thus holds the potential to become part of the standard screening protocol."

Dr Kisko concluded: "It is time to reignite the professional debate on mandatory pre-participation sports screening on a legal basis, and whether ECHO should be added to the standard protocol. We believe that in the beginning, ECHO could be reserved for screening of athletes starting a professional career in high intensity sports (marathon, cycling, triathlon, cross-country skiing, football, etc) and athletes at increased risk of SCD."

Mandatory Screening for Cardiovascular Diseases in Mexico
In an attempt to halt the CVD epidemic, an expert has now called for mandatory screening of the ......