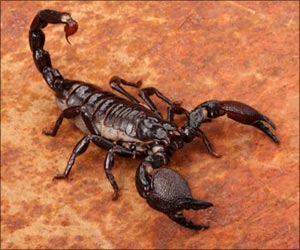 Scorpion burrows have a platform on which to warm up before the evening hunt, discover Israeli scientists.

The researchers, represented by Dr Amanda Adams (Ben-Gurion University of the Negev, Israel), investigated the burrows of wild Large-Clawed Scorpions (Scorpio maurus palmatus) in the Negev Desert of Israel. After trapping the scorpions, they prepared replica casts of their burrows by filling them with molten aluminium. Once the casts had solidified, they were then dug out to be analysed by a 3D laser scanner and computer software. Rather than being simple holes in the ground, it was found that the burrows followed a very sophisticated design.

Scorpions: How They Got Their Venomous Sting

Each burrow began with a short, vertical entrance shaft that flattened out a few centimetres below the surface into a horizontal platform. The researchers believe that this provides a safe, warm place for the scorpions to increase their body temperature before they leave the burrow to forage at night. As ectothermic animals, scorpions rely on energy from the environment to regulate their internal temperature.

Chef Elie Daviron, of a tiny bar in Paris's Montmartre district, is happy to admit his new menu has disgusted some clients while others need two or three drinks before they can face it.
Advertisement
<< Chronic Kidney Disease and Acute Kidney Injury Each a Risk ...
Light Pollution Alters Reproduction Cycle in Lemurs: Study >>

Grasshopper Mice Have Learnt to Numb Pain of Scorpions Stings

In an interesting study, scientists found that wild mice in the dessert can actually make slight of the pain of scorpions' stings