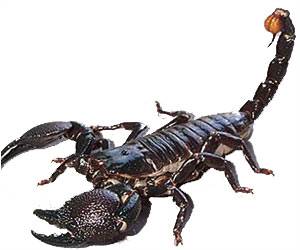 Chef Elie Daviron, of a tiny bar in Paris's Montmartre district, is happy to admit his new menu has disgusted some clients while others need two or three drinks before they can face it.

Amid the guacamole, chicken tikka and chili hotdogs, the young chef is conducting a "gastronomical experiment" with what he calls a selection of "insect tapas".

Grasshoppers, beetles, scorpions and two different types of worm -- sango and silk -- are the latest additions to his fare.


"My personal favourite is the sango worm," Daviron told AFP from behind the bar of the Festin Nu or Naked Lunch, a watering hole in this picturesque northern slope of the Montmartre hill.
Advertisement
"There are two textures.... you have the head and the body which are a completely different taste and flavour," he said.

The body was "sandy" tasting while the head was "crunchy" and tasted a bit like a combination of beetroot and mushrooms, he added.

The 26-year-old from Montpellier in southern France became interested several years ago in the idea of how insects could in future be a common source of protein in Europe.

And after the release of a UN report on edible insects earlier this year, he "realised that people were waiting for someone to do that".

Daviron ordered a selection from a company licensed to import dried insects and set about experimenting with recipes.

The result was five dishes including scorpion with pepper cooked in olive oil, beetle with cucumber, ginger pickle and green peas and grasshopper with egg.

The protein-rich insects are imported from Thailand where they are widely eaten as snacks.

But due to limited demand in France the few licensed suppliers deal only in dried insects rather than frozen or fresh.

"They are dried and salted and the taste will be a bit related to that," he said, adding that because they are dried they do not need cooking and so retain the appearance of the insect.

"The grasshopper will be more like hazelnuts and the giant water scorpions will be closer to dried fish," he added.

Student Laura Dandelot, 21, said she had to overcome her prejudices in order to try the scorpion.

"At first, I did think it was disgusting and impossible to eat because it was strange and dirty," she said.

In fact, the scorpion tasted pleasant enough, she said, describing it as a bit "like nuts", although she did not like the texture.

"It was as if you were chewing on dried tea, it was really dry but very nice," she said.

The "insect tapas" are priced at between five and nine euros (seven and 12 dollars) per serving, and on a busy night the bar dishes up about 50 such plates.

Daviron said in the two weeks since he put the insects on the menu he had witnessed a range of reactions from customers.

"Some (people) are curious, some are disgusted, some are enthusiastic, some just don't want to hear about that," he said.

"Some get into the game or maybe they wait (until) after one or two or three drinks to get started."

According to the UN's Food and Agriculture Organisation 2013 report, insects although not eaten in Western nations form part of the diet of around two billion people worldwide, mainly in Asia and Africa.

And Daviron said he was confident that in the long term other countries would overcome their reservations too.

"The disgust is really turning into a fascination," he said.

"It is difficult to say how fast and in what form it will actually become an everyday event.

"Maybe not tomorrow. It will take time... but it may be faster than we think," he said.

Grasshopper Mice Have Learnt to Numb Pain of Scorpions Stings
In an interesting study, scientists found that wild mice in the dessert can actually make slight of ...

UV Light Get Scorpions Glow Gleaming Green, Motive Detected
Finally biologists can sigh with relief for finding the reason as to why scorpions evolved to glow ....

Choco Scorpions Ticking Many A Palate In Edinburgh
A range of insect-based food products, including worm crisps, chocolate covered scorpions, and ....