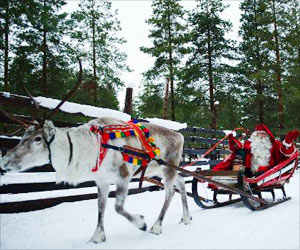 Millions of parents will lie to their children about the existence of Santa Claus or Christmas Father with the onset of Christmas season. A new study has suggested that this lie may damage their bond.

The study, published in Lancet Psychiatry, showed that the children's trust in their parents may be undermined by the Santa lie.

Google and Microsoft had their virtual eyes on Santa Claus and his gift-laden sleigh on Christmas Eve.
Advertisement
‘Children's trust in their parents may be undermined by the Santa lie, all children will eventually find out they've been consistently lied to for years, and this might make them wonder what other lies they've been told.’

"The morality of making children believe in such myths has to be questioned. All children will eventually find out they've been consistently lied to for years, and this might make them wonder what other lies they've been told," asked Christopher Boyle, Professor at the University of Exeter in Britain.


But, according to the authors, the Christmas father fantasy may not be purely for the children.

Parents may not be motivated by purely creating magic for their children, but by a desire to return to the joy of childhood themselves.

FSS campaign features Santa Claus stricken by a bout of food poisoning to reduce the number of people contracting food poisoning during Christmas.
Advertisement
For adults, it's a chance to go back to a time when they believed in magic.

"Many people may yearn for a time when imagination was accepted and encouraged, which may not be the case in adult life," Boyle said.

"The persistence of fandom in stories like Harry Potter, Star Wars and Doctor Who well into adulthood demonstrates this desire to briefly re-enter childhood," added Kathy McKay from the University of New England, Australia.

However, the study contended that lying to children may sometimes be right.

"An adult comforting a child and telling them that their recently deceased pet will go to a special place (animal heaven) is arguably nicer than telling graphic truths about its imminent re-entry into the carbon cycle," Boyle observed.

Although telling kids that Santa Claus exists is practically lying, it is actually a normal and healthy part of a child's development, reveal Psychologists.
Advertisement
<< Antarctica Hasn't Lost Much Sea Ice in Last 10 Decades
Night Green Corridor Helps Heart Transportion Over 8 Km in ... >>