Saline Water is Better Than Soap and Water for Cleaning Wounds 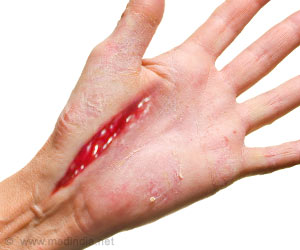 The standard practice of wound cleaning with soap and water before surgery has remain the unchanged. Researchers have now revealed that soap and water is actually less effective than just using saline water.

The study by an international team of researchers led by McMaster University in collaboration with the Research Institute of the McGill University Health Center has been published in the New England Journal of Medicine. These findings could lead to significant cost savings, particularly in developing countries where open fractures are particularly common.

Proper wound cleaning and draining is more important than the type of antibiotic, this is the key factor in healing kids' skin wounds.
Advertisement
‘Very low water pressure was an acceptable, low-cost alternative for washing out open fractures. The re-operation rate was higher in the study group that used soap and water for cleaning wounds.’

As part of the study, 2,400 people with open arm or leg fractures had their wounds cleaned with either soap and water, or a saline water solution, and one of three different levels of water pressure. Patients were monitored to see who would need to have an additional operation within 12 months because of infection or problems with wound healing. The researchers found that very low water pressure was an acceptable, low-cost alternative for washing out open fractures, and that the re-operation rate was higher in the group that used soap.


Dr. Mohit Bhandari, principal investigator and a professor of surgery for the Michael G. DeGroote School of Medicine at McMaster, said, "There has been a lot of controversy about the best way to clean the dirt and debris from serious wounds with bone breaks. All wounds need to be cleaned out - a process known as debridement - but evidence shows that cleaning wounds with soap was not better than just water, which was unexpected."

Vascular growth was faster when the wounds were stimulated electrically and this technology is believed to be beneficial in cases of trauma.
Advertisement
One of the study's co-authors, Dr. Edward Harvey, chief of Orthopaedic Trauma at the McGill University Health Center and a professor of surgery at McGill Universit, said, "These findings may have important implications for the care of patients with open fractures worldwide since developing countries deal with a disproportionate number of cases. Most of the time we were using soap and water with a high pressure delivery system to clean the wound, but now we don't, and that makes the best practice much cheaper."

The study involved patients across 41 sites in the United States, Canada, Australia, Norway and India. The majority of patients were men in their 40s with a lower extremity fracture, and the most common reason for the injury was a motor vehicle accident.

The researchers added that their findings may be particularly relevant for low and middle income countries where 90% of road traffic fatalities, and probably a similar proportion of open fractures, occur, according to the World Health Organization.

Nanoparticles Used to Speed Up the Wound Healing Process

Nanoparticles are now used to speed up the wound-healing process by inhibiting cells which travel towards the injured site.
Advertisement
<< How Recurrent Strep A Infections Enter Brain to Cause Neuro...
US Witnesses Spike in Health-Related Studies Funded by Drug... >>

MicroRNAs are short pieces of genetic code that promote skin wound healing process and could be an attractive therapeutic target for chronic skin wounds.

The Essence of Yoga Drug - Food Interactions How to Reduce School Bag Weight - Simple Tips Nutam (400mg) (Piracetam) Post-Nasal Drip Blood - Sugar Chart Color Blindness Calculator Iron Intake Calculator Calculate Ideal Weight for Infants Vent Forte (Theophylline)
This site uses cookies to deliver our services.By using our site, you acknowledge that you have read and understand our Cookie Policy, Privacy Policy, and our Terms of Use  Ok, Got it. Close
×