Rome In Religious Frenzy Ahead of John Paul II Beatification 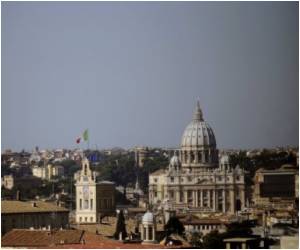 With life-size statues and T-shirts with John Paul II's famous phrase "Be Not Afraid", pope mania is well underway in Rome ahead of a May 1 ceremony that will put him on the path to sainthood.

As the Italian capital -- and the reference point for the world's one billion plus Catholics -- prepares for the arrival of some 300,000 pilgrims for the festivities, the late pope's face can be seen on billboards and buses.

A new film about a panic-prone pope who needs a psychoanalyst has divided Italy's Catholics, with a call for its boycott coming from the pages of an influential bishops' newspaper.
Advertisement

The souvenir shops and kiosks lining Via della Conciliazione -- the main avenue to Saint Peter's Square -- are brimming with images of Karol Wojtyla.


The late pope, who reigned between 1979 and 2005, is shown as a young man, praying, addressing crowds and at the end of his life when he laboured on as head of the Church despite suffering from advanced Parkinson's disease.

A large souvenir shop on the edge of the square has oil portraits of questionable taste and a life-size statue next to which tourists pose.

John Paul II is due to be beatified -- one step before full sainthood -- on May 1 at a solemn mass in the Vatican. The ceremony comes after Vatican authorities said they had confirmed a miracle attributed to the pope.

A second confirmed miracle is required by the Church for saintly status.

Some 3,000 police officers, 1,200 sanitary workers and 2,500 volunteers will be deployed for the three days of festivities, which coincide with Labour Day.

Churches and museums will be open all night and there will also be a series of exhibitions and concerts to honour the late bishop of Rome.

But the spiritual side of the ceremonies takes second place in the shops filled with pope souvenirs -- a beatification can be a lucrative affair.

A simple poster of the pope is selling for 10 euros (15 dollars).

Rome police have warned about abuses, including fake tickets sold on the Internet for the beatification mass which is in fact free for the public.

Thousands of knock-off watches bearing John Paul II's image have also been seized by police and six hotels have been shut down for abusive practices.

Elis Conrath, a Swiss tourist clutching a John Paul II calendar, said she did not approve of the commercialisation of the late pope.

"I bought this for a Catholic nun. It's important to her. But I don't like this big business much," she said.

Vatican expert Bruno Bartoloni said: "It's a sort of fetishism that the Church accepts because it thinks it will help promote its message."

At a nearby convent, the deputy head of the Carmelite Order in Italy, Don Giuseppe Midili said he wants no part in the business side of things and is offering free scapulars -- a sort of amulet worn by devout Catholics.

Midili said John Paul asked the convent for a new scapular after the 1981 assassination attempt against him because his old one was covered in blood.

He said: "We have decided not to ask for any contribution. All this is offered for free just like we received the pope's testimony of faith for free."

The Vatican has said the Pope's donor card became invalid after he ceased to be a cardinal and became pontiff and cited that as a reason why Pope Benedict can't donate his organs after death.
Advertisement
<< S.Africa's Double Pronged Marketing Scheme Focuses on Touri...
Multiple Sclerosis Treatment By Blocking Crucial Molecule >>

The Essence of Yoga Iron Intake Calculator Calculate Ideal Weight for Infants Loram (2 mg) (Lorazepam) Selfie Addiction Calculator Nutam (400mg) (Piracetam) Blood - Sugar Chart Find a Doctor Sanatogen Drug Side Effects Calculator
This site uses cookies to deliver our services.By using our site, you acknowledge that you have read and understand our Cookie Policy, Privacy Policy, and our Terms of Use  Ok, Got it. Close
×