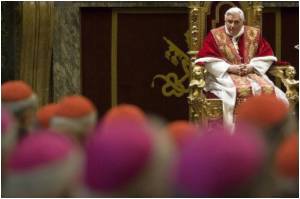 The release of a new film about a panic-prone pope who needs a psychoanalyst has divided Italy's Catholics right across the middle. This includes a call for its boycott coming from the pages of an influential bishops' newspaper.

Writing in the Avvenire daily, Vatican expert Salvatore Izzo said Italian director Nanni Moretti's film "Habemus Papam" was not respectful towards the head of the world's Roman Catholics and would be "boring" for non-believers.

The Vatican has said the Pope's donor card became invalid after he ceased to be a cardinal and became pontiff and cited that as a reason why Pope Benedict can't donate his organs after death.
Advertisement

"We shouldn't touch the pope -- the rock on which Jesus founded his Church," said Izzo, adding that "even priests" had absolved the film after its release on Friday "with the curious justification that Moretti could have been meaner."


"Why should we support financially that which offends our religion?" said Izzo, who writes about the Vatican for Italian news agency AGI.

The film comes just ahead of Easter, on Sunday, and the beatification ceremony in the Vatican on May 1 that will put late pope John Paul II on the path to sainthood.

In a message released on Monday ahead of the Vatican's 45th World Communications Day, Pope Benedict XVI gave his approval to social networking but urged youngsters not to replace
Advertisement
The film starring 85-year-old French actor Michel Piccoli as the man who is reluctant to become pope is being shown in 447 cinemas and grossed 1.3 million euros (1.9 million dollars) over the weekend -- receiving mostly positive reviews.

Jesuit journal Civilta Cattolica praised the film and Vatican Radio said that it contained "no irony, no caricature" of the pope.

Izzo's editorial does not mean the Italian bishops' paper shares his views and some observers are hoping the controversy does not go any further.

"It would be embarrassing.... This film is respectful. It has to be taken as the light comedy that it is," Vatican expert Luigi Accattoli told AFP.

Sandro Magister, another Vatican expert, said there are divisions over the film but no official condemnation from Church authorities.

"If there was to be one, it would only help the producer. He would be very happy with a polemic that is completely without foundation," he said.

It is unlikely that any boycott will go far, as previous such initiatives by the Church have tended to have a boomerang effect.

Heavy criticism from senior Catholic clergy of the "Da Vinci Code" by Ron Howard in 2006 helped turn it into a blockbuster.

Asked about the controversy in an interview for RAI3 television, Moretti said: "There is freedom of expression in my work. I am not commenting." The director then quipped: "People can boycott it after seeing it!"

Many commentators have hailed a film that touches a sensitive point.

Pope Benedict XVI said his election to the papacy in 2005 felt like "a guillotine" and the late pope John Paul I, who died just 33 days after being elected in 1978, told his advisers he did not want to accept the heavy burden.

But in the end they both could not say no to a charge that the faithful believe is divinely-inspired -- unlike the pope in the film who resigns his duties.

The head of the Catholic Association of Cinema Workers, Roberto Busti, criticised "Moretti's willingness to introduce psychoanalysis in the Vatican."

"The story does not talk about faith," Busti said.

Electromagnetic waves emitted by Vatican Radio have put residents nearby at a higher risk of cancer, a study has revealed.
Advertisement
<< What's on the Menu This Easter? Iguana, Turtle and Capybara...
Six Year Old Girl Contributes Her Mite to Save Heart Unit ... >>

Find a Hospital Color Blindness Calculator Find a Doctor Drug Side Effects Calculator Accident and Trauma Care Vent Forte (Theophylline) Nutam (400mg) (Piracetam) Sanatogen Noscaphene (Noscapine) Calculate Ideal Weight for Infants
This site uses cookies to deliver our services. By using our site, you acknowledge that you have read and understand our Cookie Policy, Privacy Policy, and our Terms of Use