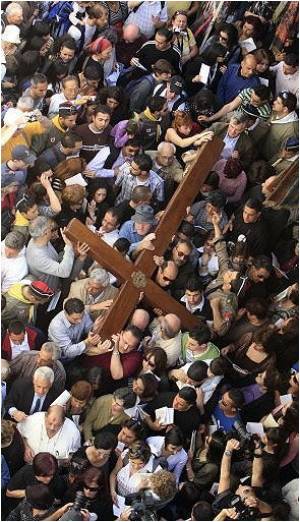 Green iguana, slider turtles and the world's largest rodent, capybara: it's not a trip to the zoo. It's what's for traditional Easter dinner in Colombia.

"This is the season we have them all coming in," said nutritionist Carolina Rangel, at a center for confiscated animals in the Colombian capital. She showed AFP about 30 confiscated "outlawed" slider turtles, common here and in Venezuela, as well as a rogue green iguana officials picked up on a bus.

This is quite the holiday season with the Easter weekend and bank holidays round the corner.
Advertisement

Sometimes problems crop up when the animals escape from their "caretakers" especially in the busy Easter season; many Colombians travel for hours on intercity buses to spend the holiday with family and prepare special meals.


"People bring them in (from far-flung provinces) secretly, even stashed in suitcases so they can eat them with relatives, or sell them at open-air markets," said local environmental official Andres Alvarez, a veterinarian.

The Last Supper,have long been observed on Maundy Thursday but research claims it took place on the Wednesday before the crucifixion.
Advertisement
Colombia has wildly varied geography, with tropical Pacific and Caribbean coasts; cooler Andean mountain climes and a huge range of plant and animal life that thrive, sometimes in relative isolation.

These recipes based on local animals -- instead of imported ones -- have close ties to the northern and northwestern parts of the country.

They are often served up in the age-old recipes of indigenous peoples descended from migrants who came from eastern Asia into North and South America thousands of years ago.

Among the mouthwatering seasonal treats: turtles' eggs omelettes; iguana soup; cayman or turtle stew, which is served up with coconut rice, fried yuca, all washed down with cold beer.

"Colombia's gastronomic wealth is a reflection of the country's biodiversity," the world's second greatest after Brazil, said anthropolgist Julian Estrada.

How the custom evolved of eating these meals at this time -- the Christian celebration of Easter -- is not so clear. But people who lived along local rivers in what is modern-day Colombia ate all of these animals before the Spanish colonial era started in the 15th century, anthropologists say.

"For our indigenous people, the sleeper turtle and iguana are historically symbolic, mystical animals and part of age-old customs. Ultimately, what happened was that the (Roman) Catholic calendar's tradition ended up melding with the fact that those animals are plentiful" during the spring Easter period, said anthropologist Ramiro Delgado.

So while many Colombians are eagerly awaiting the arrival of an exotic little something on their Easter table, hundreds of others are trying to make sure that passengers on intercity buses are people and not animals.

Rodolfo Mendoza, the chief of the environmental police in Barrancabermeja, northwest of the capital, said that his department on April 13 intercepted someone with what amounted to a mini-herd of eight capybara. They are the world's biggest rodent and occasionally can top 100 kilos (220 pounds).

Though not endangered, they are not supposed to be hunted at this time of the year so as not to interfere with their reproductive season.

Authorities have to balance trying to protect the species while respecting indigenous Colombian traditions, they say.

That is why the hunting and sale of slider turtles, iguana, and small crocodiles is illegal; but at the same time, they may be consumed by people who eat them to survive in communities where food sources are limited.

The Environment Ministry says that in just four years, more than 100,000 live river turtles have been confiscated.

"Our real problem is just trying to manage the use of these animals, not turning consumption into some big crime," said government biodiversity expert Claudia Rodriguez. "Above all because in some poor rural areas, they are the only food people have."

Tips to Get Rid Off Allergies During Holiday Season

Holidays are supposed to be the happiest times of the year.
Advertisement
<< The World's Oldest Man Just Turned Older
Ahead of Easter, Pope-And-His-Shrink Film Stirs a Hornet's ... >>

Holidays are indeed a time to have unlimited fun, but they do bring a lot of stress, as people forget themselves while enjoying the festive period.
Advertisement
News A-Z
A B C D E F G H I J K L M N O P Q R S T U V W X Y Z
What's New on Medindia

What's on the Menu This Easter? Iguana, Turtle and Capybara in Colombia Personalised Printable Document (PDF)