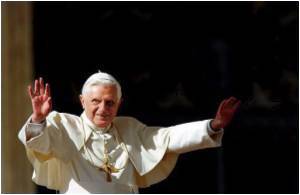 The Vatican has said the Pope's donor card became invalid after he ceased to be a cardinal and became pontiff and cited that as one of the reasons why Pope Benedict can't donate his organs after death.

Pope Benedict, 83, had a donor card back in 1999, six years before he was elected to the papacy, and at the time, he described the donation as an "act of love", saying he carried it, with all his personal details on it, at all times.

Vatican officials were forced to make the statement to stop a doctor in Germany from using the pope's card as a way to advocate the practice.


The Vatican had already asked the medic to stop doing so but he had not, prompting a letter from the Pope's secretary, Monsignor Georg Gaenswein.

Organ donation, considered the highest form of human service, allows the opportunity to give life and let others live, even though we are gone. It is a sacred act of perpetuating life, by leaving a part of ourselves in another,
Advertisement
"It's true that the pope owns an organ donor card..." the Daily Mail quoted Vatican Radio as reading the letter.

"But contrary to public opinion, the card issued back in the 1970s became de facto invalid with Cardinal Ratzinger's election to the papacy," it stated.

Vatican officials say that, after a pope dies, his body belongs to the entire Church and has to be buried intact.

Another reason was that if papal organs were donated, they would become relics in the bodies of others if he were eventually made a saint.

The Future of Heart Transplants in India

Dr. K.M. Cherian who pioneered the first Heart transplant in India talks to Medindia of heart transplants in India, the challenges in cadaver transplant and India's booming medical Tourism.
Advertisement
Advertisement
This site uses cookies to deliver our services.By using our site, you acknowledge that you have read and understand our Cookie Policy, Privacy Policy, and our Terms of Use  Ok, Got it. Close
×