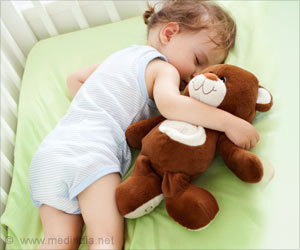 Can a robotic teddy bear help alleviate anxiety and pain for children in a hospital?

That is the hope of Dr. Peter Weinstock, the director of a training program at Boston Children's Hospital called the Simulator Program, and Dr. Cynthia Breazeal, the director of the personal robots group at Massachusetts Institute of Technology's Media Lab.

The two have collaborated to bring Huggable, a social robot prototype developed at the lab, into the hospital to study whether the robot can have therapeutic value for children who have to endure long hospital stays. The hospital is financing for the 90 children study.


The device, essentially a high-tech puppet, can talk and play with patients. In the study, one-third of the children play with Huggable, another third interact with an image of it on a tablet and the rest are given a regular plush teddy bear. All the participants are recorded on video and wear a bracelet, called a Q Sensor, that measures physiological changes.
Advertisement
The collected data and its analysis will be done by researchers at Northeastern University. Dr. Weinstock hopes the study will help doctors better understand children's emotional states, something he has referred to as the fourth vital sign.

"We think a lot about heart rate, blood pressure and how much oxygen is in the blood, but we don't have a great monitor for how the child is feeling right now. "What we do know is that children who are happier, who feel better, it can have a big effect on healing," he said.

Boston Children's Hospital has invested $500,000 in the study.

Can Heavy School Bag Cause Back Pain in Children?
Causes of backache in adults can vary but majority of backaches in growing children is traced to ......